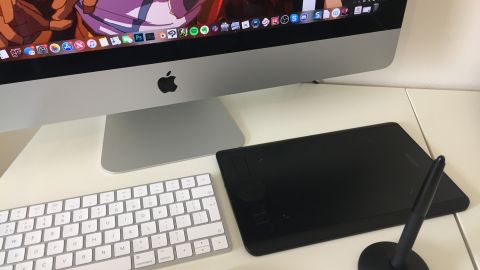 The new gold standard graphics tablet for creatives on the move. Lightweight, yet durable and with all the pro-level shortcuts at your command, the 2019 Intuos Pro Small with Pro Pen 2 offers the best pressure responsiveness with the smallest physical footprint. Creating while travelling with this is a breeze.

We knew the Wacom Intuos Pro small was coming, and it doesn't disappoint. This latest model completes the new Intuos range, following its medium and large-sized siblings, with all the same functions and features at a more compact size. The Intuos Pro small is perfect for professionals who may need to work on the go. Its physical footprint is small and it can be run via bluetooth, so it's simple to use almost anywhere. And unlike some of it's cheaper competitors, the Intuos Pro small's size doesn't affect its performance (so much so you'll soon find it in our round up of the best drawing tablets money can buy).

The Intuos Pro small's dimensions and active drawing see it come in at just under half the size of the largest in the Intuos Pro range. Despite its diminutive frame, the Pro small still boasts six programmable Express Keys, a touch ring and Multi-Touch features. It's matte black, and somehow, despite weighing less than one pound, it still feels resilient and durable.

The Intuos Pro small comes with the glorious Wacom Pro Pen 2, which delivers 8192 pen pressure levels, 60 levels of tilt recognition in every direction, sensitivity on both the pen tip and the eraser, two programmable switches and is battery-free to boot.

The Pro Pen 2 is the industry leader, and with good reason. While there are many budget competitors that tout similar levels of sensitivity, Wacom's Pro Pen 2 has a much better Pressure Response than XP-Pen's stylus, for example (read more in our full XP-Pen 15.6 review). Both are good pens, but the Pro Pen 2 will respond to even the lightest touch, and give pleasingly smooth lines without having to adjust a single setting. You won't need to worry about wobbly lines or jitter issues with this stylus.

The tilt functionality feels great too. The Pro Pen 2 comes with replacement nibs, six standard and four felt nibs inside the pens stand. The only downside to the Pro Pen 2 is the stand, which doesn't hold the stylus too securely.

At the time of writing, The Intuos Pro small retails for £199.99, which is reasonable, although, for only around £90 more you could get the Intuos Pro Medium.

Setting up the Intuos Pro small is a breeze. Initially, you connect the tablet to your Mac/PC/Laptop via USB-A to USB-C cable, download the driver from Wacom's website and you're ready to go. It's that simple. Even better, it won't conflict with any existing Wacom devices you have running currently. We tested ours on an iMac that was also using a Cintiq 24 Pro and it works flawlessly alongside it. The cable itself is over 6.5 feet long so you won't run into any trouble working from a distance, and the cable acts as a charger too, so you can conveniently power up the tablet from anything that has a USB outlet.

If you want a tidier workspace, or to be a bit more mobile, connecting via bluetooth is a simple matter of pairing it to your computer and you're ready to go. No wires cluttering up your workspace. Lovely.

The Intuos Pro small can work on any monitor, or across all monitors in a multi-monitor setup.

On the left side of the Intuos Pro small there are six customisable ExpressKeys and a touch ring, which is only two less ExpressKeys than what you'll find with the small's larger siblings. The tablet can be both left-handed or right-handed, thanks to the USB-C cord or bluetooth usage.

The multi-touch surface is intuitive and the gestures are programmable; whatever workflow suits your needs, you can achieve it with just a tap of your fingers. We found the gestures easy to to use, and didn't trigger any accidental functions, but if you want to disable the touch features at any moment, you can flip a switch on the side of the tablet, which is much more convenient than having to access some system settings. Flip the switch again and the multi-touch functions will be instantly re-enabled.

There are very few negatives to take from the Intuos Pro small, but it's worth considering the following points. If you're an illustrator, and rely on making larger brushstrokes, you may find the active drawing area somewhat restrictive. It is small, by design, so you may have to adjust to making smaller movements, which may give some artist difficulties, as well as potentially cramp your hand after prolonged usage. It's going to depend on how you draw/paint.

Similarly, more heavy-handed artists may find that they get through their nibs faster using the Intuos Pro small. Unlike its larger counterparts, the Pro small does not offer changeable texture sheets, so you're stuck with the surface grain. This could potentially devour nibs at a reasonable rate if you're a creative that pushes down hard.

The lack of software that comes as standard with the entry level Intuos range is a disappointment (no options of free Corel Painter Essentials or Clip Studio Pro here). And finally, quite possibly the smallest quibble ever to feature in a review, unlike the medium and large models, the Pro small doesn't come with the customisable colour rings for the Pro Pen 2. Madness.

Wacom Intuos Pro Small: Should you buy it?

If it's not already abundantly clear, we love this tablet range. If it's just for your office, we'd recommend paying a little more and going for one of the larger versions just so you have a bit more drawing space, but if you're after a portable tablet the size of an iPad to design with and maximise your creativity, the Wacom Intuos Pro Small 2019 is a superb choice.

If the Intuos Pro small doesn't meet your artistic needs, here are three other options that might:

Wacom Intuos S
The entry level tablet offered from Wacom is a great option for novices and hobbyists alike. It lacks the bells and whistles of multi-touch gestures, ExpressKeys and a touch ring, and has around half the pressure-sensitivity of its bigger brothers, but is a lovely budget introduction to the world of graphics tablets.

Apple iPad Pro (12.9-inch 2018)
A different kind of beast as you're constricting yourself to iOS and its limited selection of design apps, but if you're after an all-in-one solution rather than connecting a graphics tablet to a Mac, PC or a laptop (or all three if you have them!), an iPad could be the choice for you.

Huion H420 Graphics Drawing Tablet
If you want to go even smaller, this tablet has an active area of a just 102 x 57mm. The only thing that matches this size is the price, which comes in at less that £25. Granted, you'll have driver issues and it won't feel anywhere near as responsive as an Intuos, but this would be nice for beginners.

The new gold standard graphics tablet for creatives on the move. Lightweight, yet durable and with all the pro-level shortcuts at your command, the 2019 Intuos Pro Small with Pro Pen 2 offers the best pressure responsiveness with the smallest physical footprint. Creating while travelling with this is a breeze.