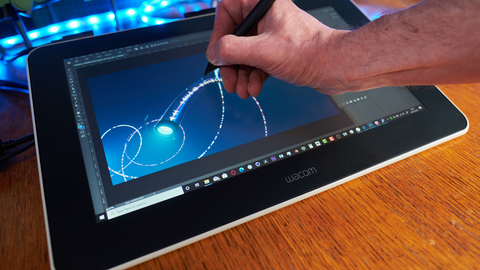 The Wacom One is a solid entry into the budget drawing tablet market. For Windows and older Mac owners looking for an affordable drawing screen, the Wacom One should be high on the list. For newer Mac and Apple Pencil equipped iPad owners, the recent inclusion of SideCar makes it a harder sell.

The new Wacom One is designed to be an affordable and, more importantly, an accessible new entry point for artists looking for a drawing tablet. The Wacom One is friendly both in its appearance and its ability to work with Windows, Mac and Android devices, most notably working with a variety of styluses other than the one it ships with.

The Wacom One could be a step up for many new 2D and 3D artists looking to find more natural ways to create. At a fraction of the price of the Wacom's Cintiq displays, has a reduction in price meant a decrease in performance? Or is Wacom's latest release set to hit a spot in our round up of the best drawing tablets money can buy?

The Wacom One is the first drawing screens I've had access to for a long time. I used Wacom's Cintiq 13 and Cintiq 21 approximately five years ago when they were needed for my visualisation work. However, both of these devices went to eBay heaven for a couple of reasons. Firstly because they always presented a cabling nightmare and secondly because they were big and cumbersome.

Also, the iPad Pro and the Apple Pencil happened. iPad applications like Duet and AstroPad mimicked the functionality of a Cintiq, and when the iPad was not being used as a drawing tablet or second screen, it could also be used as an iPad. So I was interested to see what the Wacom One could offer in a post-iPad world. Especially with the addition of SideCar, which allows a newer iPad to be used as the second screen or drawing display with more recent Macs with no additional applications.

Wacom One review: Design and accessories

When opening the packaging for the Wacom one, I was relieved to see that Wacom still puts effort into its packaging, everything I needed was accessible and available. However, there are still cables, this is both good and bad. Bad because who wants to mess with cables in this wifi world? The Wacom One needs three to connect to a computer; one for USB, one for HDMI and one for its own power, the latter of which is annoying. The good point about cables, however, is it means the device doesn't draw power from a laptop, which is the case for iPad solutions.

On both Mac and Windows, the Wacom One was plug and play. Wacom haven't skimped on dongles for the lower price. There are USB-C adaptors included for both the HDMI and USB cables, which meant that the Wacom One worked with no additional dongles needed for my two test computers (Razer Blade 15" and a 2017 15" MacBook Pro).

The Wacom One unit itself is housed in a very well made white utilitarian plastic case, that has a couple of fold-out legs which stow away flat when not in use. There is a single power-lead which has a HDMI and USB connector, and that's it.

There is no adjustment in the legs, and the placement of the power lead means that it is difficult to turn the screen around so that it could sit as an upright second monitor, which feels like a missed opportunity.

The stylus that comes with the Wacom One is a more basic solution than the Pro styluses that I am used to with the Wacom Intuos range. In the little styluses defence, in use, as it has 4096 levels of pressure sensitivity, drawing felt as precise as it has always done with Wacom tablets. There is only one button on the stylus, which can be mapped to whatever the user desires using the Wacom drivers. I also missed a hardware button on the Wacom One itself.

The screen resolution is 1920 by 1080, which for the size is absolutely fine, especially when working with Windows. Another size benefit is that viewing angles held up well for colour accuracy when viewed off centre, even though the screen can only manage 72% of NTSC colour gamut coverage.

The screen's one major downfall is that it simply isn't very bright, and this can be an issue in a room with overhead downlighting, as the matte surface spreads out diffuse reflections.

When compared with an iPad with an Apple Pencil, that can connect to Mac with the new SideCar software, the screen difference and quality is literally night and day in the iPads favour. SideCar also implements dynamic software buttons on the touch display of the iPad, making it, in my opinion, a better experience both in use and value. As when the artist is not using SideCar, they also have an iPad to use.

Wacom One review: Should you buy it?

The Wacom feel is 'better' than the iPad, in terms of latency. However, the drawing experience is identical on iPad or Wacom One, and a basic iPad and Pencil can be found for approximately the same price as a Wacom One.

For Window users, however it is a very different story. I have never been tempted by a drawing device other than Wacom, due to their reliability and feel. In this regard, the Wacom One maintains the Wacom brand well. The Wacom One is a robust and dependable device that always just 'worked' when I plugged it into the Razer laptop. Due to its flexibility, rugged construction and drawing experience, the Wacom One should be considered by any artist looking for their first drawing display – as long as they don't work in room with lots of bright lights.

The Wacom One is a solid entry into the budget drawing tablet market. For Windows and older Mac owners looking for an affordable drawing screen, the Wacom One should be high on the list. For newer Mac and Apple Pencil equipped iPad owners, the recent inclusion of SideCar makes it a harder sell.