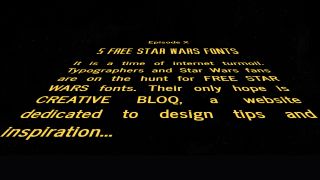 Star Wars fonts are the first feature of the iconic films, appearing long before the glowing lightsabers or imposing spaceships. The epic typography packs a visual punch when accompanied by the exciting intro score, and Star Wars fans have long been searching the galaxy to find the specific fonts found onscreen.

We've collected the best free Star Wars fonts from far and wide and popped them into this handy list for your enjoyment. If you need something a bit different, check out our free fonts roundup that's packed full of more great fonts for those with no budget.

Now Disney Plus has launched with its own dedicated Star Wars section, it's the perfect time to explore the best sci-fi fonts available across the internet. Don't have Disney Plus yet? Get a free 7-day trial right here.

What is the Star Wars font?

This question isn't a simple as you might think. Over the years, the styles have been tweaked and polished by directors, much to the indignation of fans.

Every Star Wars film opens with the familiar line 'A long time ago in a galaxy far, far away...' written in a cool blue typeface. (Or purple or turquoise – your nostalgia mileage may vary.)

The lettering for this outer space 'once upon a time' was originally created by hand, so short of tracing a screenshot, you're not going to get a 100 per cent match. However, the latest Star Wars films – from The Force Awakens onwards – have used a digitised version of the font, with Franklin Demi singled out as the closest match.

Once this line fades away, we're deafened by John WIlliams' epic opening fanfare and left in awe as the Star Wars logo dominates the screen before gradually drifting off into the distance. Shortly afterwards, the opening crawl appears and fills us in on the story so far.

This is only scratching the surface of Star Wars fonts. The logo for the film has been adjusted plenty of times as the creators try to settle on a style. One experiment saw the Star Wars: The Last Jedi logo turn red and send the internet into meltdown as fans tried to figure out what it could mean. Thankfully, the logo remained yellow in the film itself.

Speaking of the Star Wars logo, we've rounded up seven versions of the font which you can download for free.

You know you're in safe hands when a designer called Boba Fonts is taking care of your free Star Wars fonts. With Star Jedi, Boba Fonts has recreated the logo perfectly, with solid and hollow variants ready to meet all your needs. This tilting, capitals-only font has a lot of variations and connections.

According to the author, this Mandalorian font is a movie-accurate version of the Mandalorian font, as seen in the Episode II Visual Dictionary and the 2004 Star Wars DVD release. It's especially timely given the release of the new TV series, and would be particularly handy for video makers looking to make their YouTube reviews looks extra on-brand with the series.

And speaking of the Mandalorian, here's a picture of Baby Yoda – because it's always a good time for that.

Inspired by an adventure in a distant galaxy, this Star Wars font comes in 10 different styles and is totally free. It has a symbol pack too, with logos from the film included.

We can't introduce this font better than its creator, sharkshock, so we'll just let them explain:

"In a distant galaxy far, far away, fans of this epic series had limited options when looking for the right font to use for their projects. Patience you must have young Jedi and thank me later you will. Enter Death Star : A grotesque display font featuring all caps that resembles the classic '80s style."

With tight kerning, this font is best displayed at large sizes. The regular version is available for free, with an outlined alternative available for a $25 donation.

Good old Boba Fonts has done it again with this Star Jedi Outline font. As before, this is a tilting all-capitals font, only this time, as the name suggests, the lettering is framed with a thin outline. Font fans and Star Wars nuts can download it for free for both personal and professional use.

Following on from the Star Jedi line of fonts again, Boba Fonts has created this variation that allows for single or double lines of text that perfectly capture that Star Wars style. These decorative frames call to mind some of the aesthetic choices used in promotional material for the original Star Wars trilogy, which sometimes saw the title of a film wrapped in a thin outline.

With it's chunky letter shapes, this final design from Boba Fonts is based on the official Star Wars Trilogy Special Edition logo typeface. Remember when there was just one Star Wars trilogy? Aah... simpler times.

"Star Jedi Special Edition is a bold font derived from the original Star Jedi," says Boba Fonts. "The lowercase are all capitals, while the capitals are serif variants of the lowercase. A few simple link-lines allow you to create complex letter groups."