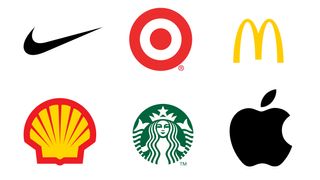 Top brands paring back their logos to their simplest, most iconic form has been a big trend in recent years. Ownership of a graphic shape can be a powerful visual shorthand that commands global brand recognition and transcends language – but it takes an extra layer of confidence to strip out your company name altogether.

Pentagram recently took its already pared-back Mastercard rebrand a step further by dropping the wordmark and leaving only two overlapping circles to do the heavy lifting, and at first this seemed like a bold move. But it's just the latest in a string of household-name brands that are recognisable enough to get away with it.

When a wordless symbol is familiar enough, it can help a global superbrand appear more personal and less corporate. Without a company name shouting its presence, a 'visual shorthand' logo design can also evoke a more immediate, impulsive reaction.

Read on as we explore six more huge brands that, like Mastercard, made the decision to drop the company name from their logos (also see our post on the best TV logos for more logo inspiration).

Apple has proudly sported a wordless brand mark for decades – you have to go all the way back to 1984 to find its name anywhere near its logo.

Ronald Wayne initially chose to represent Apple Computer Co with a woodcut-style illustration of renowned apple enthusiast Isaac Newton, sitting underneath the tree where he reportedly received his fruity inspiration for gravity.

To say it didn't last long, in branding terms, would be an understatement – the following year, Rob Janoff's iconic bitten apple replaced it. The rainbow apple retained the wordmark until 1984 when it finally became wordless. While it has also since lost its rainbow stripes, that silhouette has remained constant through thick and thin.

Now, it's almost unthinkable for this trailblazing champion of minimalist design to write its company name next to its logo. Why would it need to?

Seattle's world-conquering coffee chain boasts a fascinating story behind its logo. The company was named after Captain Ahab's first mate in Moby Dick, so the original logo designer Terry Heckler decided to draw on a 16th-century Norse woodcut of a two-tailed mermaid for inspiration.

Starbucks' siren has been re-crafted several times since the company was founded in 1971, but it wasn't until Lippincott's 2011 rebrand that she was trusted to shoulder the lion's share of the global chain's branding equity.

Dropping 'coffee' from the name reflected diversification, but dropping 'Starbucks' entirely showed true confidence in the iconic mark's instant familiarity to coffee lovers around the world.

It's always going to take time for punters to link a two-tailed mermaid with a caffeinated beverage – but the fact that there's no logical link there gives Starbucks a distinctively ownable association to create from scratch.

Sometimes, however, a brand's name lends itself perfectly to symbolic representation – making that visual shorthand much easier to establish. Apple is one example, and Shell is another. In fact, it's something of a trailblazer in the world of wordless logos: from 1900 until 1948, a realistically drawn black-and-white scallop shell did all the work.

The red-and-yellow colour scheme was gradually introduced into Shell's service stations – and was finally incorporated into the logo itself, alongside the company name, in 1948. The shell became increasingly bold and stylised, and by 1999 it had accumulated enough brand equity to stand alone once again.

Once a prominent architectural feature of its restaurants, the Golden Arches first made their way into McDonald's logo in 1961 – before that point, the fast food chain's text-heavy logos incorporated taglines such as 'McDonald's famous barbecue' (1940) and 'McDonald's famous hamburgers... buy 'em by the bag' (1948).

In 1968, the Golden Arches adopted their modern-day form – with the company name overlaid at the bottom. This approach was refined further in 1975 with the distinctive red background, and many other variants were introduced in different contexts. The tagline 'I'm lovin' it' made an appearance in 2003, and went on to replace the company name across many brand touchpoints.

Decades of ubiquity had given the Golden Arches symbol all the brand equity, confidence and global recognition it needed to stand alone by 2006, without the company name, any accompanying slogans, or any graphic treatments to speak of – just a pared-back, flat-colour 'M' that is unmistakably McDonald's.

Like Shell and Apple, Target has the good fortune to have visual shorthand baked right into its company name. In fact, the brand mark functioned without the company name as far back as 1968, when the US retailer refined and simplified its original six-ringed target, which had the company name overlaid across the centre, to the pure three-ringed symbol we know today.

However, the company name was re-introduced in 1975, and while the distinctive target was retained, it was shrunk to a much less dominant scale and was scaled to match the height of a chunky black all-caps wordmark.

The emphasis was reversed again in 2004, when the wordmark was scaled to match the diameter of a much larger target symbol which, since 2007, has been widely used in isolation, just as it was in 1968. In this case, the brand equity in the logo was there all the time – it just took the confidence to bring it back.

When design student Carolyn Davidson sketched the Nike Swoosh in 1971 for the princely sum of $35, little did she know it would go on to become one of the world's most instantly recognisable textless logos.

Until the mid-90s, an italicised all-caps wordmark in chunky Futura Bold accompanied it, but the Swoosh ultimately became such an iconic mark in its own right that the need to state the brand it represents became redundant.

Of course, the common factors that all of these examples share is a huge marketing budget and global ubiquity, so building layers of meaning and brand association into a textless graphic symbol may seem comparatively easy for them. But even the world's biggest brands had to start somewhere – and their success stories prove the long-term value of any brand investing equity in its mark.