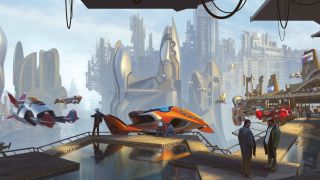 When he was 14, Scott Robertson finished sixth in Ohio’s famous Soapbox Derby, in a car he’d designed and built with his father. Aside from being an unexpected claim to fame, this is telling for two reasons: it highlights the prolific concept artist’s early love of vehicles, and foretells his later career working at the cutting-edge of design and technology.

Best known for his vehicle work, Robertson has worked across a staggering range of projects – from feature films like Steven Spielberg’s Minority Report and Hot Wheels animated series Battle Force Five, to theme park attractions like the Men in Black ride at Universal Studios. He’s designed consumer products including wheelchairs and bikes, written 13 books on art and design though his publishing company Design Studio Press, and coproduced more than 40 educational DVDs with The Gnomon Workshop.

But it all started with cars. “Some people just grow up loving things with wheels,” he shrugs. “It was that simple at first. As I got older, that fascination with the function and design of vehicles continued.”

At California’s Art Center College of Design – where his father had studied illustration – Robertson fine-tuned his fascination, graduating with honours with a B.S. degree in transportation design in 1990. “I came to appreciate more fully the complexity of the machines and the careful balance of engineering and style that each possess,” he recalls. “All of these mechanical and aesthetic elements simultaneously working together presents a design challenge, and that’s what makes them especially rewarding to design and build.”

Despite his early focus on vehicles, Robertson’s roots remain in product design. The day after graduating, he launched a product design consulting firm in San Francisco with his best friend and course mate Neville Page, attracting clients like Nissan, Volvo Yamaha and Everest-Jennings with their durable medical and sporting goods. Was this an unusual first career step for a transportation designer?

Not really, says Robertson. He’d been studying both disciplines until his last year at school, so it was natural jump: “About halfway through my education at Art Center I realised that most mainstream car design of that era moved at a snail’s pace, and was quite corporate and conservative. That’s when product design started to become more interesting,” he explains. “I built upon some internship work I’d started in 1989, when I worked for Kestrel Bicycles and Medical Composite Technologies designing bicycle frames and wheelchairs manufactured with advanced composites. Starting the consulting studio with Neville seemed like a good opportunity to continue servicing these two clients… and our products were modes of transportation, after all.”

Since then, Robertson and Page have hosted industrial design and drawing tutorials at Switzerland’s Art Center, Europe, before relocating to Los Angeles where they continue to consult for clients ranging from Raleigh Bicycles to Mattel Toys, Nike, Angel Studios and beyond.

For Robertson, industrial and entertainment design are intrinsically linked, and his experience in product design is at the core of his practice as a concept artist. “Many well regarded concept artists and designers have their fundamental education in industrial design,” he says. “The practice of industrial design is being able to project the desires and needs of a customer into a plausible product, be it car, bike, wheelchair or shoe.

“This learned skill – to research any subject and imagine, visualise and invent a solution to satisfy the project goal, and then be able to present that solution using drawings and renderings to others – is the foundation of creating new products for our own world and for imaginary ones, too.”

Robertson continues: “The same thought process can also be applied to designing experiences for people, so the jump from industrial design to entertainment design, where people interact with imaginary worlds full of props, vehicles and other characters, is a relatively familiar intellectual exercise. The main difference is that entertainment design requires a lot less effort to design how an object might actually be engineered and manufactured. It mostly needs to look cool and be entertaining.”

One of the biggest problems in design and creative education today, he says, is that too few students understand how to build physical objects. This lack of understanding hinders their ability to draw from their imaginations and ‘communicate believability’ in their designs. Robertson should know: he’s been teaching and creating curriculum on how to design, draw and render for almost 20 years. He’s trained several high-profile concept artists including Thom Tenery (Star Wars: The Force Awakens) , Ben Mauro (Elysium) and Khang Le (Hawken), and was key in the creation of the Entertainment Design department at Art Center College of Design.

“There were very few, if any, entertainment design programmes being offered at college level at that time,” he explains. “It was around 2004 or 2005 that we officially began the programme, if I remember correctly. Art Center already had top-notch illustration and industrial design programmes, so it was uniquely qualified to offer entertainment design, which I’ve always considered to require roughly 40 per cent illustration and 60 per cent industrial design skills.”

It makes sense: in transportation design, for example, artists are always constrained by the ‘package’ – or “the specific arrangement of the functional elements of a vehicle that a designer can’t easily move around to achieve new vehicle proportions,” as Scott explains. A deeper understanding of the engineering and manufacturing of a vehicle, however, can help a concept designer find opportunities to innovate and influence the package. This, he points out, can greatly improve the overall visual appeal of the entire end product.

When it comes to his own creative process, everything starts – broadly speaking – with research based on the design brief or script. Early ideas form as sketches or written notes, and from this initial “idea dump” he creates new sketches to share with others for feedback.

“After this critique process, I choose a direction and communicate the concepts more clearly by creating full-colour, photoreal renderings in Photoshop or a 3D modelling and rendering program like MODO,” Roberston continues. “Based on the input from these presentations, a design either moves into physical modelling or stays in the digital realm for final modelling. I repeat the feedback loop of prototype-present-critique-refine until the design is right or they run out of time or money – whichever comes first.”

Since finishing his last books, How To Draw and How To Render, Robertson’s gone back to his roots in industrial design and is currently working for a start-up on “one of the most exciting projects” that he’s ever been part of. For now it remains a closely guarded secret, but you can expect a public announcement in early 2017.

On a personal front, he’s also spent the last year designing and building a 1934 Ford hot rod truck with the team at Foothill Fabrication in Corona, California. He’s documenting the design and build process via his Facebook and Instagram (@scoro5) accounts. And this is key: self-initiated projects run centrally through Robertson’s practice – and it’s his top advice for all concept artists.

“You have to realise that doing professional concept art and design work is a ‘yes’ job. What I mean is that the job isn’t there to satisfy your own personal, artistic pursuits. You’re creating designs and art to tell someone else’s story or to build their business around.

“You get paid well to do this job, so act professional – but always set aside a little time for yourself to pursue your own projects, on your own time and on your own dime,” Roberston advises, before delivering the punch line: “Doing this keeps the professional work in perspective – making it much more enjoyable to say ‘yes’ with a smile on your face.”

This article was originally published in ImagineFX magazine issue 139. Buy it here.