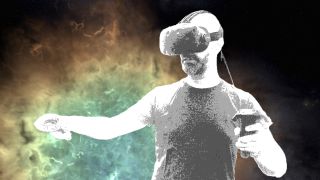 Unless you've been living under a rock for the last few years, you'll be aware that VR is making a comeback. The medium's come a long way recently and there are plenty of exciting and innovative ways it's being put to use, from creating immersive 3D movies to helping educators.

However, as with any design development, there are naysayers out there who think it's just another flash in the pan that we'll be bored of in the coming months. But where do those in the know stand? We asked some design experts to see what they make of VR's potential.

“I am truly excited about the potential of this medium," says Niklas Lindstrom, head of interactive production at  Droga5. "We have a long way to go, but that’s exciting. We tend to apply old truths to something new, and that’s why the focus has mostly been around VR as a new way to tell stories.

"For me, the real potential of VR is to make people feel truly immersed in experiences they wouldn’t otherwise have, so the focus should more be about influencing and enhancing people’s emotions and interactions in the experience than delivering a certain story. The user creates their own story, and so becomes the storyteller.”

“We’re already seeing virtual reality used by doctors, sports coaches and educators because of the real benefits it brings," explains Duan Evans, executive creative director at AKQA. "VR is here to stay, it’s only going to get more sophisticated and immersive. Although gaming and entertainment are currently the primary uses, the positive impact VR can bring is incredibly exciting.”

“For anyone working in motion, I feel this is an exciting area," Alex Donne-Johnson, creative director at Dazzleship. "VR is either rendered (360 video) or real-time, leaving most motion designers only able to create rendered video.

"The community is rapidly shifting towards GPU rendering, specifically things like Octane by Otoy, who have made various developments with VR and Oculus. Combine this with Nvidia’s increasing GPU power, and it seems that motion designers should shift into VR as producing real-time VR becomes more likely. It’s an exciting medium, but it still needs more time to mature.”