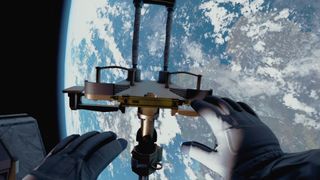 Virtual reality isn't exactly new, but it's only been in the last few years that technology has reached a point where it can start to enable truly immersive and believable VR experiences that, crucially, don't leave you reaching for the sickbag.

It's a world of exciting new opportunities for creators, but it's also one that needs to be approached with a level of caution. Building VR isn't simply about adapting a flat-screen experience to work on a VR headset; to do it well you'll need to rethink your process in a number of ways. Here are five tips that will start you on the journey to getting VR right.

Strong storytelling is vital for meaningful VR. Even if your project is essentially a product demo, try to craft a narrative for the user journey. Tease viewers towards the action with visual or audio cues. If the piece is interactive, build a discovery phase into the story so VR newbies can learn how to navigate.

Don't think of a VR project as an isolated piece – develop a narrative so it echoes or expands on existing marketing campaigns or brand stories. The best VR gives the user access to something they would never normally see or feel, so think about aspects of the brand that are truly inspiring.

A gripping story or lots of interaction can help viewers forget they are in virtual reality. One-on-one experiences tend to have the most impact – just make sure your subject isn't too close to the camera. CGI can often be more 'real' feeling than live action as disbelief is already suspended. Avoid the uncanny valley with a strong animation aesthetic, or by sticking solely to non-human characters.

Storyboard every shot, examining all the possible outcomes. Choreograph scenes to avoid awkward stitching – for example, if you're using several cameras, it's important that characters don't appear in two places. Spend time mending 360 degree environments in Nuke or Mistika to avoid painful experiences and testing all the time as you go along.

VR is generally 10 times more intense than other media, so slow and steady experiences are the most pleasurable to watch. Keep camera moves slow or static, and avoid pans, horizon pitch and vertical oscillation. Don't overfill the 360 degree field – the viewer will feel frustrated that they've missed the action.