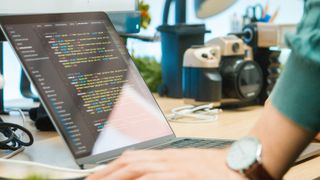 One of the best laptops for programming can have a big impact on your working life. If you're a programmer, you'll know the benefit of having a powerful laptop, or if not,  the pain of having a sluggish machine. While computer programming or coding doesn't necessarily need the most powerful laptop money can buy, your work probably also involves tasks like complex image editing that do require more powerful hardware.

And, of course, testing and running the apps, websites or games you've created, often using emulation, can also be fairly intensive. With this in mind, we've rounded up the best laptops that coders and developers can use for day-to-day work.

Bear in mind that ergonomics make a big difference if you're going to be at your machine for hours on end – as most of us are. It's a good idea to complement your laptop with some top accessories too, to get the best out of it. Check out our guides to the best keyboard, the best mouse and best monitor.

Read on for an in-depth look at each of these and the rest of our top 10.

Best laptops for programming: What to look for

Programming can be done on many different types of machines but many programmers want something more than just a basic laptop.

Screen size is really important when selecting a top laptop for programming. You'll get more on a 15-inch screen than a smaller one, for example, so it's easier to read through code and make GUI adjustments. Of course, with a bigger display you sacrifice portability.

Memory is also key. Heavyweight development environments such as Visual Studio will run better with a healthy dollop of RAM and we'd recommend considering a minimum of 8GB but 16GB ideally.

Also consider getting an Intel Core i5 processor as a minimum – that level of power isn't exceptional but it will guarantee you enough performance, especially if you're doing things like working with complex website layouts that have a lot of background code. Large, complex programs compile faster with a faster processor.

Graphics can also be key depending on the development work you're doing. If you're working with game development in an environment such as Unreal Engine or Unity then you need to consider the graphical requirements of those apps.

And remember it's a good idea to use an operating system that's aligned with your goals. Want to develop in Xcode for the iPhone, iPad and Mac? Then you're going to need a Mac.

For portability, performance and price, this is a brilliant all-rounder

The Huawei MateBook 13 is our pick for the best laptop for programming right now. Huawei stormed into the phone market with its excellent, competitively priced range of handsets, and now it’s done it again with laptops: this portable has great specs for coding work.

For a (relatively) modest asking price, you’re getting all the power of a Core i5 or Core i7, a crisp, bright, high-resolution 13-inch display, and loads of SSD storage. It makes Apple (and other high-end manufacturers) look like thieves. What’s more, it’s super portable too, weighing just 1.3kg and less than 1.5cm thick. This is worth a look before considering anything else.

A great laptop for programming if you're on a budget

The Dell Inspiron 14 5000 is a great all-round laptop for programming. There are three key things to look for if you want a great modern laptop – a Full HD (1,920x1,080) IPS display, a quad-core processor (at least) and speedy SSD storage. Aside from that, it’s easy to get fixated on bells and whistles when talking about laptops but many coding tasks don’t require anything particularly exotic.

Dell’s Inspiron 14 5000 ticks all these boxes, and guarantees great running performance and an excellent system for all computing tasks, including more taxing processing jobs. The starting specification gets you the aforementioned high-resolution display, a quad-core Intel Core i5 processor, 8GB of memory and a 256GB SSD, with a sleek build and a starting price that really isn’t too extortionate. Go up a level and there’s 1TB of storage and a Core i7 processor.

There's also a 2-in-1 version of this machine, but that's not what we're referring to here.

£1,727.99
View at Lenovo UK
Incredible performance in a slim chassis
One of the best displays on a laptop
Wired ethernet has shifted to a new ‘mini’ standard
Not vastly cheaper than Apple’s premium models

With this model, Lenovo has taken the kind of computing experience most of us assume is only possible with a desktop workstation housed in a large box under a desk, and not only made it portable, but squeezed it into a thin design.

It's ideal for those that need workstation power. The Lenovo ThinkPad P1 offers professional-grade Xeon processors, with up to six cores, an Nvidia Quadro T2000 graphics card and up to 64GB of memory.

You can stuff it with up to 4TB of nVME SSD storage, and opt for a 15.6-inch 4K display that’s not only touch-sensitive but colour-accurate too. It’s a great general-purpose workstation, capable of all kinds of visual design work and heavy lifting processor-intensive tasks.

Of course, it works great for coding as well. That’s partly thanks to Lenovo’s excellent keyboard design, but in general, the ThinkPad P1 is superbly built, including a semi-rugged chassis that can survive light knocks, and a very healthy selection of ports.

Windows programming on Microsoft’s own hardware

As it comes from Microsoft, the Surface Laptop 3 effectively offers a pure Windows 10 experience, making it a benchmark for testing and developing Windows software. It has a great design, a solid aluminium shell and a very comfortable keyboard. The newest version comes in matte black and offers fairly meaty specifications, with a Core i7, up to 16GB of memory, 1TB SSD storage and a high-resolution 13.5-inch screen that works with Microsoft’s Surface Pen stylus.

There are a lot of other variants, too, meaning you can get the power that you want. It isn't as cheap as some options out there but you do get a superb laptop, now with USB-C.

The best MacBook for programming and other tasks

While Apple's MacBook Air is the most portable Apple laptop, the 13-inch MacBook Pro is now our first choice for working with Xcode to develop apps for iOS and macOS when on the go.

Quad-core eight-generation Intel CPUs are now an option, delivering across-the-board performance improvements, making this MacBook both portable and powerful. While it might weigh slightly more than the aforementioned MacBook models, the performance boost will be worth it when running taxing processing tasks, such as heavy-duty coding projects.

And since Macs can run Windows just fine via Boot Camp or in a virtual machine such as Parallels, you’ll be able to use your Mac to develop apps for any platform on Earth.

Portable and affordable, the Zenbook is a great laptop for programming

Despite dated stereotypes of programmers being stuck in bedrooms and offices, many coders see the profession as highly sociable – whether it’s working together on group projects, or attending one of the numerous workshops and conferences that exist all over the country.

In that case, you might prefer an alternative to the bulkier laptops we’ve suggested and instead, put portability at the top of your wish list. The 13-inch Asus Zenbook UX-430 is an ultraportable option – weighing just 1.25kg and measuring 15.9mm – without a massive price tag. However, even though the Zenbook is slim and well priced, it has a specification that’s still great for coding work.

The latest HP Envy 13 is a great pick for programmers. HP recently made big changes to this popular 13-inch laptop by reducing the size and weight. Coupled with a high-quality touch-sensitive display, it’s both powerful and super portable. But perhaps the most noteworthy change is the stunning all-metal design, covering the keys and around the screen area that absolutely earns this laptop the ‘Envy’ moniker.

The keyboard has plenty of travel, with page up and down keys, and the trackpad is large enough to be extremely comfortable - both critical aspects of a laptop for long coding sessions.

For Android developers, a Chromebook might seem a natural choice for the best possible integration with Google’s software and services, with full support for running Android software natively. However, many Chromebooks are designed to be highly affordable, with lower-spec features and performance suffering to bring the price down.

The Pixelbook Go is an upgrade from more basic models, designed to compete with the bigger laptop manufacturers. It still runs ChromeOS, which supports Google’s Android Studio development tools, but the hardware is right up there with a standard Windows laptop. You can also run Linux apps as well.

The Pixelbook Go is certainly the best Chromebook ever made. It packs some impressive hardware, including an Intel Core i7 processor, a choice of 8GB or 16GB RAM and a large and vibrant 1,920 x 1,080 screen or 4K touch screen if you really want to show off.

A high-end 2-in-1 that’s great for programmers

The 13.4-inch HP Spectre Folio is a great 2-in-1 device for programmers. We’d generally pick a laptop over a tablet for pure coding, but a 2-in-1 is a worthy substitute, as it gives you an environment where you can test tablet applications as well.

This high-end example oozes quality thanks to its gorgeous leather cover, which earns it the Folio name. There's a great internal specification as well – with up to 16GB of memory and a Core i7 processor, it’s not going to disappoint in the performance stakes, but it might leave a hole in your wallet.

A decent upgrade with new display

The MacBook Air hadn't been upgraded for ages and it was becoming a problem. It was still a good entry point, but was being upstaged by other models. That all has changed with upgrades in both 2018 and 2019.

The newest MacBook Air has been completely redesigned with a high-resolution display, faster processors and more memory, all of which make a big difference to programmers who don't need the more comprehensive MacBook Pro we've covered above. And, naturally, it's extremely portable and so very light.