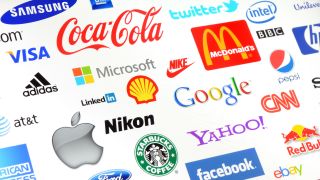 Would Apple be the world’s most valuable brand if it were named Banana? In branding, few things are more important than choosing the right name. If things go well, you’ll be stuck with it for a long time. If things go very well, you might just add a new word to your language, if not to several languages, as demonstrated by Hoover, Xerox, Kleenex, and, well, Portaloo.

While logos play a major role in how we see a brand (see our guide to logo design), verbal communication means it’s still through a name that we usually first encounter a brand, spread it through word of mouth, ask for it, and look it up online.

Names are “the primary constituents in the product’s signification system,” semiotician Marcel Danesi says in his book Brands. They’re also one of the things that makes a brand protectable in law. Here we’ll look at how some of the world’s biggest brands got their names and what lessons can be learned from their stories.

Startups might agonise endlessly over a name, while sometimes inspiration strikes in the most unlikely of places. According to his biographer Walter Isaacson, Steve Jobs was visiting an apple farm while on a fruitarian diet when it occurred to him that this common fruit could provide a fun, accessible name for a computer company.

It was short, catchy, un-intimidating, easy to turn into a logo, and the fact it had nothing to do with computers made it stand out from the coldness of the IT world – in contrast to other names Jobs was considering, such as the threatening sounding Executex. That the word is part of the existing vocabulary of many people also created a poetic resonance evoking associations Jobs probably never even considered back on that fruit farm – the tree of knowledge, the innocence of childhood, Newton’s apple (which provided an early logo), and even a urban legend that the brand was named as a tribute to Alan Turing, who committed suicide by biting into a cyanide-laced apple.

Despite leading to almost 30 years of disputes with Apple Records, the name was perfect. If Jobs had gone gooseberry picking instead, it’s hard to imagine similar success.

Sometimes names pop up more through accident than inspiration. Larry Page and Sergey Brin had been calling their initial search engine BackRub because it analysed backlinks, which made sense to the initiated but sounded like a massage device to anyone else, and might have been difficult to develop into the world’s second most valuable brand (Amazon is number one, see point 6).

The words googolplex then googol, both very large numbers, came up during a brainstorming session, and the latter was then apparently misspelled when fellow Stanford grad student Sean Anderson checked whether the domain was available. It’s since become a verb used the world over, while we’ve yet to hear anyone tell us to 'Bing' something.

It partly works so well because it almost seems to sound like it should mean what it’s come to mean, with an existing verb suffix (-le) and a similarity to 'goggle', which means to look.

Here, the spelling change was accidental but there are plenty of companies that changed spelling intentionally to gain memorable, and legally protectable, names, though The Sci-Fi Channel’s heavily mocked transformation into SyFy should also serve as a warning to handle with care.

Some names are so literal that it would seem they couldn’t have taken much time to think up, whether they’re named after their founder or a descriptive summary of what they do.

'The Facebook', as it was originally known – the 'The' was later dropped only to be added back in by grandparents everywhere – was named after the physical paper directories distributed to freshmen at US universities, and it initially served the same purpose, first for Harvard then the Ivy League, and then overseas universities before opening to all in 2006.

The name was literal and simple enough to quickly transcend boundaries. Another of the world’s biggest brands, Coca-Cola was similarly direct when it was named in 1886 after what were then two of the main ingredients, coca leaves and kola nuts, helped by the alliterative phono aesthetics of the repeated 'co' syllable. In both cases, distinctive fonts helped very literal names take on the personality to stand out as a brand (see our post on the fonts of big brands, or our guide to free fonts to create your own designs).

04. Be inspired by the Gods

Hundreds of companies have turned to the classics, to Latinate words and to ancient mythology with an almost superstitious faith that they’ll bring luck, and the idea that they’re a universal part of the collective consciousness, even if most people have little idea of who they were or what they mean.

Nike was the Greek goddess of victory, making it a great choice for a company that makes footwear for athletes, even people can’t agree on how to pronounce it, while the swoosh symbol perfectly renders the wind of victory to such a point that the logo alone is enough to identify the brand (as we examined in our post about textless logos).

Just a few other brands to follow the same track include Oracle, Mazda, Alax, Argos, Olympus, Athena, Orion Pictures, Pandora jewellery, Subaru pickup trucks, Dionysus wine suppliers – and Isis Pharmaceuticals, which renamed itself Ionis to avoid trading under the ISIS ticker on the Nasdaq following the rise of the Islamic State.

Sometimes it pays to take a glance away from the whiteboard and look outside. There are many companies named after where they were founded, even if it’s not immediately apparent. Adobe was named not after the building material, which is a nice association, but after a creek that runs behind the area where founders John Warnock and Charles Geschke lived in Los Altos, California.

Cisco Systems meanwhile is simply a shortening of the name of tech city of San Francisco – take a look at its logo and you’ll see it’s actually the Golden Gate bridge.

Oil and gas giant Shell, founded in 1897, is also named after something that had nothing to do with its business but which founder Sir Marcus Samuel had around him – his father, Marcus Samuel Senior, had run a business selling exotic seashells to collectors in London.

Plenty of companies have chosen names that start with the letter 'A' purely to appear close to the top of alphabetical lists. Why that worked so well for Amazon was that choosing the name of the world’s largest jungle set out the scale of its ambition to become the biggest online store and to stock everything under the sun.

It was a happy accident that there’s also a 'Z' in the name, allowing designers at Turner Duckworth to create the smile logo linking the A to the Z, perfectly re-emphasising the concept behind the name.

According to Brad Stone’s The Everything Store: Jeff Bezos and the Age of Amazon, Bezos has his lawyer to thank for talking him out of his first choice of name – Cadabra – which he dropped after his lawyer misheard it as Cadaver.

Branding experts and dabblers in the occult will tell you that certain letters have magical power, while 'A' gets you near the top of the list, 'K' – Kodak, Kraft, Kelloggs, Kmart – is considered to be a strong and incisive, while 'X' and 'Z' also appear in brand names much more than they do in general speech.

07. The shorter, the better

Ingvar Kamprad Elmtaryd Agunnaryd is a bit of a mouthful and would be unlikely to make it as an international brand. IKEA on the other hand is short, snappy and sneaks into the top 40 most valuable brands in the world according to Forbes. Ingvar Kamprad was the founder of the company, Elmtaryd is the name of the farm where he grew up, and Agunnaryd the name of the village where the farm’s located.

And it doesn’t only apply to English. Toyota Motor Corporation was founded by the Toyoda family but changed its name because 'Toyoda' takes ten strokes of a pen to write, while 'Toyota', in both the katakana and hiragana systems, uses only eight, which is considered a lucky number in Japanese culture.

While it can be difficult to change names after becoming established, it’s not impossible. Changes most often come due to mergers and buyouts or forays into new markets that needs a more international-friendly names that can be pronounced by customers in other countries. IBM stands for International Business Machines Corporation, which is more expansive than the original and awkwardly hyphenated Computing-Tabulating-Recording Company.

C-T-R was so named because a consolidation of several companies with different focuses, and IBM, adopted in 1924, proved to be a much better definition for the course the company would take and its global ambitions as it began to expand beyond the US. There’s also speculation that Thomas Watson, the man who led the expansion, wanted to get one up on his former employer National Cash Register Company – grudges can spawn creativity!

Another lesson to learn from IBM is that it can pay to embrace your nickname. IBM accepted and used its Big Blue sobriquet which was seemingly coined by customers themselves owing to the large blue mainframe computers the company manufactured in the 1970s.

09. Work with what you have

The world’s most valuable general clothing brand after the self-named Louis Vuitton is Spain’s Zara. Founder Amancio Ortega Gaona originally planned to call his first shop Zorba after Zorba the Greek, but it turned out he wasn’t the only person in the town of La Coruña to have been inspired by the 1964 film, and a nearby bar with the same name complained.

Ortega had already had the moulds made up for his signage, so he hastily rearranged what he had to come up with Zara. Yet another near miss, and like most of the names on this list, the result is concise, distinctive, memorable, and trips off the tongue (in several languages). Today high streets the world over would seem almost to be missing something without Zara’s logo (although its latest iteration contains some controversial kerning).