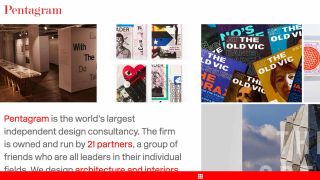 Given that it’s arguably the most famous design agency in the world, Pentagram needs little introduction. Ever since the five founding partners Alan Fletcher, Theo Crosby, Colin Forbes, Kenneth Grange and Mervyn Kurlansky set up shop in north London in 1972, its uniquely compelling structure – equal partners, sharing wealth, wisdom and workspace – has never been successfully replicated.

While there are now four times as many partners – spread across studios in London, New York, San Francisco, Austin and Berlin – that ethos has remained constant, with each partner heading a small, self-contained team. Globally, this means there are 21 small studios, under the umbrella of one 170-strong agency.

For many years, Paula Scher flew the flag as Pentagram’s only female partner – this number has also quadrupled. Natasha Jen, Emily Oberman and Marina Willer all became partners in 2012, with Jen and Oberman joining Scher in New York, and Willer – a former creative director at Wolff Olins –in London.

The Computer Arts team recently spent an enlightening afternoon with Willer and her team, getting to the heart of how Pentagram’s much-envied agency structure works from the perspective of one of the small creative teams, to determine what other agencies can learn from this approach. Read the results of the team's Q&A with Willer below...

What does it take to be a Pentagram partner?

"Each of us brings a style. We are very hands on for every project, and our style is what we believe in. As a result, Pentagram is extremely diverse. We make a point of not having once strong common vision or view of the world, and really accept that diversity. What we all share is a love of design, and a set of unwritten principles about wanting to leave a mark on the world. That’s how we choose a new partner – someone who can leave a mark somehow through the work they make."

How is a new partner chosen?

"The quality of the work comes first, but it’s fascinating how much this group values personality. It’s almost like a club – not in a negative way, more like a family. We want people we trust, and like, and want to spend time with. It’s a real partnership, not an ‘in and out’ thing. It’s not a job. It’s about building a community, and believing that Pentagram stands for something even though it’s not written anywhere."

Has there ever been talk of adopting a more traditional model, and appointing an executive creative director to oversee the output?

"If someone brings the idea, it’s quickly disregarded. It’s not our culture. Anything corporate is a no-no. It’s refreshing.

"Sometimes you think it’s crazy, because it doesn’t feel very strategic. You might think, ‘This would make more money if we did it this way,’ but it’s about keeping a culture that values the work, the friendship, the quality of what we create, rather than risk destroying it because we want to make more money.

"What’s interesting about our business model is that the pressure is on each of the partners to make it. We are the ones who are always working late. When I’ve worked in other businesses, you see the juniors working late to prove themselves. There’s almost an inverted logic here, because the pressure is so on us to do great work.

"Our names are out there, and we also feel responsible towards our fellow partners because we share the profits. If one partner is doing really well and you’re not, you feel you owe them. Unlike in other companies where the senior people spend most of their time in meetings, everyone’s always busy working."

Does your time as a creative director at a large agency like Wolff Olins give you a different perspective?

"I was at Wolff Olins a long time. If you look at my portfolio, many of the jobs I’m most proud of – Tate, Oxfam, Amnesty, Macmillan and so on – I did there. I had an amazing time, and learned to think about design in a strategic way. That hybrid equipped me to feel more confident, and to think of design as a holistic experience rather than a decorative visual practice.

"That’s definitely interesting to Pentagram. Not that the others don’t do that, but many of them come from boutique studios. They often partner with strategists, though.

"Every time someone joins they bring their own trajectory, and I’m just pleased that I joined when I was already prepared. I can choose the clients I want to work with, and in a way the commercial pressure is different. Each team is like a small start-up, and we have to really work to keep everything going, but it’s not to the same mass scale as any companies that belong to groups and have the pressures that they have.

"There’s a support network, but you still have to be able to run your own gig. No one’s going to tell you what to do, and if you joined something like this too early, it would be difficult to make it."

You’re currently working on your first feature film, Red Trees. How does your film-making experience inform your branding work?

"I never studied film properly, but at the Royal College I spent a lot of time doing moving image, and at Wolff Olins I started to experiment with the Tate identity using similar techniques.

"I was doing installations in a little room and filming and photographing, instead of doing it at a computer. It was generated through projections and into mirrors, so it’s a typical merge between film and design. The outcome was an ever-changing identity, one of the first really because it was almost 20 years ago.

"For me, films and brand identities both rely on a strong narrative; a strong idea. Then it’s about how you tell that story. If the idea isn’t there, if you’re just looking for some kind of decoration, it just doesn’t hold together. It’s important that the two things help each other out."

This article was originally published in Computer Arts magazine issue 261. Buy it here.