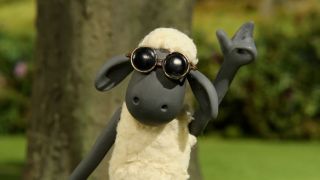 From the archive: This interview originally took place in Autumn 2017

A recent Frubes animated commercial shows two characters, animated yogurts, fishing on a frozen ocean. One tries to freeze the other by sawing a hole in the ice, only to end up falling in the water and freezing himself.

Aardman Animations created the Try Me Frozen campaign to promote freezing the children’s yogurt to make ice lollies. It’s a self-contained story, complete with a twist, a joke and a punchline, told front to back in under 20 seconds. It’s charming. It’s funny. It’s silly. It’s everything Aardman does best.

“The big thing Aardman is based on is really strong characters and storytelling,” says Jess McKillop, an executive producer and head of production resources. “And that can go into any kind of production that a client would be looking for. We try and bring warmth and humour to any idea that our partners may have.

“The truth is: you can have a line drawing, stick figures. If the story’s right, then it doesn’t really matter what the method is.”

From Morph to Chicken Run

Nick Park joined in 1985. The writer, director and animator created Wallace and Gromit, and Shaun the Sheep. Over the next two decades he earned six Oscar nominations, taking home four golden statuettes.

In 1993, Park and his team completed The Wrong Trousers, Aardman’s first 30-minute story, one of the most successful animated films ever. It heralded a golden period for the studio: A Close Shave (Oscar winner), Wat’s Pig (another Oscar winner), Morph’s Files (a full TV series), Stage Fright (picked up a BAFTA), Rex The Runt (the studio’s first animated series for adults), Angry Kid (its first series released exclusively on the internet), and Flushed Away (the studio’s first CG film).

But it was Chicken Run that really took things up a level. Directed by Lord and Park, and funded by DreamWorks, the studio’s first proper feature film came out in summer 2000. Reviews glowed. The box office banked over $220m.

As well as films, TV shows and advertising campaigns, Aardman works on apps, games and websites. You can see Aardman characters in museums and exhibitions, in live shows and in theme parks around the world.

Fitting all the cogs together

McKillop works on projects from ideas stage to completion, overseeing all the various departments involved. “Your job,” she says, “is to make sure that every single cog in the wheels fits seamlessly together.”

A big part of McKillop's role as producer is bridging the gap between what the client wants and what the director wants: “You’ve only got a set budget. But you might have a situation where the director wants three different things, and you can only afford two of them.

“The director is more the creative and the producer the organiser. It’s not the producer’s job to tell the director what to do. It’s working as a partnership. And sometimes you have to say, ‘We haven’t got time for the monkey, the giraffe and the elephant.‘”

McKillop works on as many as 10 projects at a time. No two jobs are completely alike. But usually the studio receives a script from a client or an agency representing the client. A director joins. The director and client work out a vision between them. McKillop helps put together a schedule, a plan and a team – often freelancers support the in-house team.

They record sound first, because the team animates to dialogue. They create an animatic, a timed storyboard. Designers get to work on the characters, then rig them with a skeleton: physically in the case of puppets, digitally for everything else.

Lighting and polishes in sound and overall appearance bring the project to a close. It can take between a few weeks to several months – or years in the case of feature films.

Ben Toogood first worked for Aardman on Wallace & Gromit: The Curse of the Were-Rabbit. He joined the company full-time a few years later and is now head of 3D. A large part of his job is “fixing things that’ve broken... the bits no-one else wants to do, the leftovers.”

Toogood supervised the Frubes project. His team was small, six people, but it took them just four weeks to complete the commercial. Yet in contrast to commercials, Toogood says, films offer a lot more time to “get down to the nitty gritty” and make it “exactly how you and the director wants it to be.”

Commercials are more about the big picture – making sure the bones are solid – and can’t always be as slick as feature films. “You can forgive a few bits and bobs here there,” he says.

Project Everyone, from 2015, is a great example of how Aardman Animation manages to tie together its work in so many different fields.

In The Headquarters of the United Nations, each country’s representative is a furry animal. When the speaker of the house, a llama in spectacles, announces a new initiative to end extreme poverty and to tackle climate change, a huge party ensures. It’s charming and full of warmth. We immediately care about the characters and therefore we immediately care about what they have to say.

Mat Rees works as supervising senior animator. He says it’s a 50/50 split between the more recognisable Aardman productions – the stop-frame, plasticine stuff – and the CG work, such as the UN project. But even in commercial work, where clients increasingly want more for their money, with budgets smaller and deadlines tighter, Rees still manages to have fun.

“In the short films, you have a reasonably small team. So you keep everyone tight. You just have the director to deal with. When you’re making commercials you’ve got the director, and the agency above them, and above them you got the clients. So there are more levels of approval.

“But even if a character’s not my thing, I still enjoy moving it around, getting something out of it that way.”

Rees says the studio is also happy to try new technologies. He worked on Google’s Spotlight Stories – a series of 360-degree immersive videos for mobile and virtual reality. Aardman’s contribution, Special Delivery, is about a lonely janitor on Christmas Eve.

The challenge was telling the story in a non-linear manner. Special Delivery offers a number of small stories within the larger narrative, depending on where the viewer chooses to look.

“It’s only when you look at stuff in the headset,” he says, “that you realise you can do so much stuff with it... But there’s no grand plan. When something like that comes in, we just get stuck in.”

Next month, Nick Park releases his next film, a “prehistoric adventure” called Early Man. There’s also a Shaun the Sheep sequel in the pipeline.

But for Rees, the best thing about working at Aardman isn’t the big feature films. It’s something far simpler, something that encapsulates the studio’s whole ethos: Aardman allows staff to work on their own projects. More than that, they can use the studio to do it and other staff members are encouraged to help out.

“That’s one thing people are always surprised about,” Rees says. “But it’s good for your own development, and it adds to the company, too.”

This article was originally published in ImagineFX, the world's best-selling magazine for digital artists. Subscribe here.