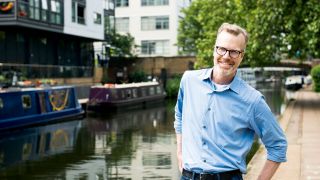 Jeff Veen will speaking at Generate London in September; in Crafting a creative culture he'll share advice from his two decades of experience leading the teams behind some of the world’s largest digital products. Don't miss it; book now!

"I'd never thought, like, some day I'd be in finance," says Jeff Veen. But here we are; having played a major role in some of the most web's most important developments – spearheading UX-driven design at Adaptive Path, bringing analytics to the masses at Google Analytics, and upending the way we approach fonts on the web at Typekit – Veen is now a design partner at venture capital firm True Ventures.

He's also made the surprisingly smooth transition from the West Coast to Hoxton, London. "You know, we're on the other side of the road when we're driving around, but other than that it's still startups and pourover coffee and fixed-gear bicycles everywhere I look," he smiles.

Veen's early years were marked by an interest in technology, but a career in straight computing was never on the cards. "I did a bit of computer science in university," he says, "and found I was not interested in the rigour of learning the math and things like that, but I was enamoured with what you could do with the machines themselves."

So after studying journalism and history, Veen found himself working at a Santa Barbara newspaper just as traditional print publishing methods were being swept away by digital workflows. Different departments were being merged together, and the young Veen found himself not only writing and editing stories, but also getting involved in issue planning and laying out pages.

"I found it fascinating," he says. "I was really interested in the information hierarchy and even things like how the flow of the pages worked together."

Veen started making web pages back in 1993, including an HTML CV that would later score him his big break with Wired magazine. Veen responded to a call for interns by sending in an email containing a link to his CV online. "I was apparently the first person that had done that," he recalls. "It got their attention and they called me up for an interview."

His time on Wired – most notably working on HotWired, its web-based spin-off – taught Veen some valuable lessons. "That sense of discovery and collaboration, I think, is something that informed a lot of my values throughout my career," he notes. "The fact that all of this is new, we need to figure it out together so we can make something that's bigger that we can all benefit from – it's a very different competitive stance than I think exists today on the web."

HotWired was also where Veen started to see the potential of UX- and data-driven development. The platform was supported by advertising, which meant from the beginning everything was driven by metrics.

"We quickly realised we could tell how it was being used, and optimise based on that use," Veen explains. "And that led us down the path of: Instead of shipping something and then seeing how the statistics drove the future iterations, could we find a way to do that before we even ship?"

As it turned out, yes, they could. Veen joined six others to form Adaptive Path, with a plan to use research methodologies to inform products before they were built. This information would influence the direction of the project, as a way of reducing the overall risk and therefore the overall cost.

Smarter and smaller than the big rockstar agencies of the late 90s, Adaptive Path was a perfect fit for the more cautious times following the dotcom bust of 2000-2001. "We could do these nimble, lightweight projects with the goal and the pitch being that we would improve the functionality of the site that existed already, using a set of methodologies that introduced companies to their customers. It was incredibly successful, it worked really well."

And yet it wasn't Veen's ideal environment. He didn't enjoy consulting that much, he felt a need to create his own product instead of troubleshooting other people's. This led him to launch Measure Map, a web app that helps people analyse their blog statistics. The product was quickly bought by Google and resulted in Veen spending two years designing Google Analytics – "and for better or worse that's still more or less the interface that they have today."

Realising the size and scope of Google was interesting, but it still wasn't where he wanted his career to be, Veen left looking for a new project to pursue with his original Measure Map team. Around the same time, browsers started to introduce the @font-face rule they had previously shunned, and concern began to rise that fonts were about to be Napsterised, like music had been.

Veen saw an opportunity: "What if we put a little bit of protection on the font files, and we would host all the fonts and sell them as a subscription service like Spotify, which was also very new at the time? You would have access to an entire library, you wouldn't have to make licensing decisions to be creative, you could choose any font you wanted, and since we were hosting them we could measure the usage and pay royalties based on that. It worked like a charm. It grew like crazy and really started to change the way the web looked."

It didn't hurt that around the same time, the iPhone and the iPad were forcing developers to step away from Flash, and instead build sites using CSS, JavaScript and, of course, web fonts. "It was a big sort of transitional period," reflects Veen, "and I think Typekit dipped into it right at the perfect inflection point."

Typekit was later snapped up by Adobe, which wasn't just interested in web fonts but also in shifting its Creative Suite to a subscription model, a process that Veen and his team were well qualified to help with. "A large part of the conversation was to do with if we could take what we had learned about selling design assets as a service rather than as a software sale, through a subscription model with royalty payments and all of that kind of stuff, and help migrate Creative Suite into what became the Creative Cloud," he explains.

After three and a half years as VP of design for Creative Cloud, it was time for Veen to move on again. With no clear plan what to do next, Veen started talking to True Ventures, the company that had been the lead investor in Typekit. He had a good relationship with the team, in particular Tony Conrad, the partner who had led the investment. The pair had a series of lunches and coffees, and Conrad began asking Veen if he might be interested in joining True Ventures.

"I'd never considered venture capital as part of my career, but the more we talked about it the more I realised that in some ways it paralleled a lot of what I'd been doing," Veen explains. "This idea of figuring out the things that work on the web, sharing them with other people, helping guide the way that all happens. In the way Silicon Valley works today, having some influence over the things that get funded is a great way to help guide and shape the direction of the web."

Today Veen dedicates roughly half his time to the investment side of things; the rest he spends in more of a mentorship role with the companies in True's portfolio. He also acts as an advisor to companies such as Medium and WordPress, and has just started a podcast – Presentable – in which he chats with guests about how design is changing the world. There are also, of course, speaking engagements, including his talk at Generate London on crafting a creative culture.

Still fully engaged by the ever-changing world of UX, Veen is currently fascinated by the possibilities of virtual and augmented reality and how they're going to affect interaction models. "I also think that exposing all the power of machine learning, through either chat and messaging interfaces or voice interfaces, is a whole other area of research we're going to have to start doing to create user experiences for digital products," he enthuses, "which I find, frankly, thrilling at this point in my career. There's never an opportunity to be bored."

While technology is moving forward in leaps in bounds, there is an area that is holding the industry back: diversity, in terms of gender, ethnicity, age and socio-economic background. Veen believes it's something we must address if the practice of UX and product development is going to mature.

"There's been a very particular kind of person that has been a user experience designer for way too long," he says, "and what we're seeing is the products that come out of teams that don't have very much diversity don't consider the range of options for the solutions that they provide, and leave a lot of people out."

It might not be a technical issue, but it's a tough one to tackle and Veen is well aware that True Ventures needs to practise what it preaches. "If you go look at our About page it's not a tremendously diverse place," he admits, "and we're working on that as well, as a way of saying: Look, this is very important, and it's going to be the way forward. Let's get this right, now."