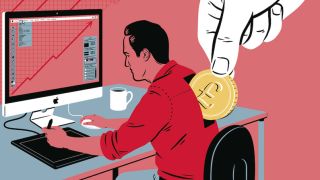 We have seen big investments to buy, build or bolt-on design programmes in recent years. A few events stand out in my mind: IBM's announcement it would earmark $100m and hire 1,000 designers in 2012; the tumult of design agency mergers and acquisitions through 2014 and 2015; Mike Bracken on stage at the O'Reilly Design Conference earlier this year reporting the jaw-dropping fact that the UK Government Digital Service has saved UK citizens £4.1billion.

Despite those big moments, I continue to encounter many small moments – in hallway conversations at conferences or in phone calls with clients – that suggest lots of companies are still barely scratching at the surface of user experience design's potential. So, before we haul out the confetti cannons, let's stop and ask: Are the success stories emblematic of our industry overall, or are they just noteworthy exceptions?

This is a question I've been researching over the past two years – first as an analyst at Forrester Research, and more recently on my own as an independent research and design consultant. My latest work is a study from May 2016 that asked UX pros from a variety of organisations about the state of UX where they work.

In all 266 people participated, with titles ranging from UX designer to chief designer. The information they shared sheds further light on the variable state of UX today, and helps uncover what a strong UX practice currently looks like. It also pinpoints some warning signs that UX might be an underdeveloped capability – and consequently a risk factor – in an organisation.

This research began with a basic question: In your opinion, what is the level of strategic impact of UX in your organisation? Participants ranked their answers on a scale of 1-5. 'Low impact' means someone has ranked their company as a 1 or 2, 'high impact' means they gave their organisation a 4 or 5. Let's dig into what makes the difference between high and low impact when it comes to UX.

It starts with where UX sits inside the organisation. UX by its nature spans product, technology, marketing and even operations, so many organisations struggle with where UX should sit functionally. Judging by the data, there's no common standard; UX teams are pretty well distributed among the areas listed above.

However, in companies where participants ranked UX high impact, it tended to sit in a distinct design or customer experience department. Where UX efforts were seen as low impact, it was more likely to be housed in product (low), IT (lower) or marketing (lowest). That makes sense; being in a stand-alone function gives UX more ability to work across the end-to-end customer experience. When UX is stuck in one organisational silo, it has less reach.

Another telling indictor is the balance of design to engineering. For respondents from high-impact UX organisations, the ratio of UX designers to engineers sat somewhere between 1:4 and 1:20. In low-impact organisations, the ratio often clocked in at 1:20 or above. Where there are strong UX-to-engineering ratios, there's also often strong UX leadership, securing budgets and headcount for strong UX teams. Not surprising then that high-impact UX is often accompanied by UX leaders at director level and above, while low-impact UX leadership tended to stop at manager level.

Activities like digital design, user research, prototyping and testing are the bedrock of a UX practice. But there's more to it than that, and higher impact organisations recognise this. UX pros reporting higher impact were also more likely to report that design processes include more up-front framing and shaping work – efforts that define strategy, requirements, and quality standards. Lower impact teams tend to stick more to the bread-and -butter UX work.

What this suggests is that for UX circa 2016, basic digital design work has become table stakes. The real benefits that lead to higher-impact UX now come from the UX professional's ability to infuse product and service strategy with real insight about customer needs, and help evolve these offerings over time so they remain not only viable but also desirable.

Related to these process questions are product questions. When UX is downstream of strategy and requirements, channels and touchpoints come predefined. In low-impact organisations UX has a narrower remit, focusing mainly on websites, marketing and internal tools – necessary, to be sure, but really just the price of entry for businesses today.

When UX has more upstream involvement it's more likely to define solutions that flow across multiple technologies, channels, devices and touchpoints. Those UX teams end up designing for more types of contexts, from basic web and mobile design to emerging digital channels and – in about a third of cases – service design.

Ultimately, these indicators mean nothing if they don't connect to impact. And, to be honest, too few UX professionals (across the board) can say definitively that they've connected their work to hard measures like earnings. But it's still more common to find high-impact teams doing some kind of maths to quantify their success stories.

When asked 'What measurable outcomes resulting from user experience are you most proud of?', high-impact respondents gave responses like: "multimillion dollar increases in conversion and customer lifetime value". By contrast, one low-impact respondent answered, "We are moving so fast there has been no time or resources for testing/outcomes – even for small usability improvements."

These differences seem subtle, but they underlie basic beliefs about UX. Does a company see UX as a tool primarily to create efficiency and cost control? Such organisations tend to be more interested in task completion, reducing clicks, bug reduction – in short, basic usability. On the other hand, an organisation that sees UX as lever to create competitive value expects UX efforts to net happier customers, understanding that happier customers are good for business.

So what does all this mean? Ultimately, it shows that organisations that aim to use human-centred design to lead their markets and capitalise on the potential of digital technologies do so by creating empowered, appropriately-staffed UX operations. And for all the companies still sprinkling a little UX on existing processes? Well, don't expect to change the world. Or your industry. Or even stave off the competition. It's a digital world we're living in, and UX design will be an integral part of it for a long time to come.