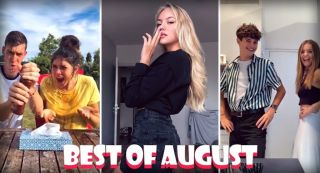 TikTok is ignored by the old, and dominated by the young (Image credit: YouTube/TikTok)

Don’t know what TikTok app is? If you work in the creative industries, you need to get up to speed fast, right now. Why? Well...

Remember that time when nobody under 25 was talking about Facebook any more, and the buzz seemed to be around this new thing… Instablam, or Instafam or something? Well, that’s exactly what’s happening now in the world of social video. (If you're after some Insta tips, see our post on how to change the font in your Instagram bio.)

The most downloaded app in the US in 2018, and now available in over 150 countries and 75 languages, the TikTok app reached the one billion downloads mark in February, and that number continues to climb.

It is, in short, the latest cultural revolution to hit social media. And as with all previous revolutions, its popularity is hugely skewed towards the young, while many older people haven’t even heard of it.

So what exactly is TikTok, and why should creative professionals care? Read on as we explain everything you need to know.

01. It lets you make short videos

Fundamentally, TikTok is a social platform for making, sharing and watching short videos using your Android phone or iPhone (see our posts on Android apps and iPhone apps for our top apps for creatives). These may be anywhere between three and 60 seconds long, although most typically run to around 15 seconds.

In this way, it’s similar to the now-defunct Twitter app Vine. But there are a number of important differences.

First, TikTok is a standalone app, not an adjunct to an already-existing platform. Second, and uniquely in the social media space, it’s not a product of American, Silicon Valley culture, but comes from China (where, for complex legal reasons, it’s available as a separate, but identical app called Douyin).

Thirdly, the TikTok app has a set of unique features. These include the ability to use preloaded tracks from a wide variety of music genres in your videos, special effects like slow/fast motion, stickers and filters, and the ‘React’ feature, which lets you film your reactions to a specific video (which itself appears in a small, movable window).

02. The videos are fun and silly

In terms of functionality, TikTok doesn’t offer much you can’t find in other apps. What really makes it so important is how it’s actually being used, by hundreds of millions around the world.

The first thing you notice about videos on TikTok is that they’re lively, silly, fun, OTT, and often just plain weird. They’re the perfect antidote, then, to the kind of po-faced projections of 'perfect lives' that have quickly become a cliché on Instagram.

In contrast, TikTok app videos are mostly joyously amateurish, and unthinkingly honest. There’s a real sense of kids 'being themselves' that you don’t get on other platforms.

(Note: Ironically, because Creative Bloq isn't yet set up to embed TikTok videos, we've featured YouTube compilations in this post, which naturally focus on the higher quality clips. But you'll still get the broad idea...)

So what do people do in TikTok videos? Well, for one thing there’s a lot of lip syncing and dancing to pop songs. A LOT.

As you’d expect from kids messing about, most of this is laughably shambolic compared to the heavily edited and polished production values of today’s YouTube stars. But that’s kind of the point.

Most of the people uploading videos to TikTok don’t want to be celebrities, they just want to have fun, and that fun can be incredibly infectious. Plus the use of preloaded tracks means that you can enjoy the song in high fidelity, even if the video itself is a bit rubbish. (See our best video editing software if you're interested in creating high-quality videos.)

One of the main planks of TikTok culture is responding to challenges, such as the stair step challenge, where participants dance up a set of stairs in elaborate ways. Some of these are set by TikTok itself, some by brands, musicians and media celebrities, and some just naturally generated by the community itself.

Pets doing daft things is another popular theme on TikTok, as are cosplay, stunts, lip synching to comedy routines, and playing out famous TV/film scenes. Whatever the subject, though, the videos here range from highly professional, to cute and adorable, to annoying and cringe-inducing. All (young) human life is here, basically.

Right now, TikTok's not really an appropriate place for sharing visual work such as art, design, 3D modelling or even animation; that's a little too "serious" for the presiding culture, which is why we haven't included it on our list of best social media platforms for artists and designers. That said, social media cultures change quickly, so we're certainly not ruling it out in the near future; watch this space...

You do follow people, and some of the most popular accounts have eye-popping numbers of followers. (The record is currently held by Loren Gray, who has 33.2 million at time of writing). But it’s not really about that.

Most creators simply want to be on TikTok to make funny clips to share with friends, and the wider world, in that order. And others are just there to watch (as on YouTube, you don’t have to upload anything in order to enjoy people’s clips).

Best of all, when it comes to the comments section, TikTok seems to have avoided – for the moment – the kind of nastiness that’s tainted so many other forms of social media.

That doesn’t mean TikTok is without its problems. Like every other service popular with young people, it’s been accused of attracting cyberbullies and sexual predators, encouraging obscenity, and mishandling private data, an issue that’s been magnified in the wake of the Huawei controversy and general paranoia about China.

More generally, TikTok users should not be generalised as the 'voice of youth' today. Look on other social channels and you'll find lot of other youngsters being very scathing about its clips and the kind of people who make it. Although how much of that is just general class prejudice, or sheer jealousy, is a matter for debate.

But aside from all that, TikTok is a place where popularity is not (yet) powered by personal connections, friend circles, clever SEO tricks, Russian bots, marketing money or mainstream celebrities. It’s primarily powered by how much users like your videos: nothing more, nothing less.

If you haven't downloaded the TikTok app, then why should you care about it? Because the wider culture is becoming heavily influenced by it, in ways you may not even be aware of.

Take music. One of the biggest tracks of the year globally has been Lil Nas X’s Old Town Road. But while it’s been near impossible to avoid the song, what may have escaped you is how it became so huge.

Not, as you might expect, through radio play. Not through steaming music platforms like Spotify. Not even via Twitter, Instagram or Snapchat. No, this track first became titanic on TikTok, when a meme took off via the #yeehaw hashtag, which prompts youngsters to drink 'Yee Yee Juice' and change into cowboy/cowgirl clothes just in time for the song's drop.

This was by no means a one-off, either. Many other songs, old and new, have blown up internationally via TikTok memes too, including Flamingo by Kero Kero Bonito, Pretty Boy Swag by Soulja Boy, Sicko Mode by Travis Scott" and Fake ID by Riton and Kah-Lo.

And it’s not just musicians who are using the platform to attract attention. TikTok has been used by everyone from Tonight Show host Jimmy Fallon, who asked users to roll around on the floor like a tumbleweed, to Google, who got people creating entertaining videos that utilise their Google Assistant.

In short, when it comes to promotion on social media, brands have an enticing new alternative to using influencers, with their demands for money, gifts and free holidays in return. In contrast, if teens on TikTok like your idea, then masses of them will put time and effort into making videos that promote it, for free, and purely for their own amusement.

So far, it seems, there’s no resistance among TikTok video creators to helping even the biggest companies in this way. Which means for creatives, it’s really a matter of coming up with neat and fun ideas to inspire youngsters, and achieve cut-through.

No one’s saying it’s easy, but if you work for a full-service creative studio, expect your clients to soon be demanding it, if they aren’t already. Best of luck!