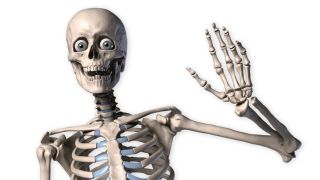 Anatomy is a huge subject and requires a blend of scientific information and artistic practicality. For example, you need an engineering-like understanding of how the skeletal joints work to construct your figures. But if you don't know how to draw well enough to get a good gesture, no technical understanding of the joints is going to save you from awkward-looking movement.

Too many artists get stuck on one side or the other: either having a complete understanding of medical anatomy, but being unable to draw a convincing- looking bicep. Or having enough figure-drawing experience to be able to fake the form, but not really understanding what they’re doing and inevitably drawing something physically impossible.

Yet when everything is in balance, anatomy is magic, and it enables you to create a human figure in any pose you want without reference. I’ll do my best to get you started in this workshop, with an introduction to the skeleton and muscle physiology as well as a few specific hints and tips on depicting the torso muscles. For more information, see our posts on how to draw muscles, and how to draw an arm.

Bones are the foundation of the body. Muscle and fat, in contrast, can vary wildly from person to person and even throughout a lifetime. The skeleton, however, is much more reliable. Understanding it is vital for knowing where to attach muscles, and also helps with proportion. For example, the rib cage will always be as deep as the head is tall, no matter how much fat or muscle there is on top.

02. Use the bony landmarks

To help identify the placement of the skeleton, look for the bony landmarks. These are key spots on the body where the bones are superficial, with no muscle or fat blocking them from the surface of the skin, and include your collarbones, elbows and the back of your spine. They’re more trustworthy than skin-based landmarks like the navel, because skin can sag and stretch. Trust me, the bony landmarks are your new best friend.

03. Giving yourself a headstart

There are three main masses that determine the balance of the human body: the head, the rib cage and the pelvis. The spine connects these, and connects to the arms and legs. We need a strong understanding of these forms so we can invent them from any angle, which means simplifying them down to a manageable structure. For the head, that’s a sphere for the cranium and a block for the jaw.

Simply speaking, the rib cage is egg-like, but we can do better than that. It has about the same depth as the head, but it’s one-and-a-half head heights tall and one-and- a-quarter wide. It’s thinnest near the neck and reaches its widest point about two-thirds down. Once you have the major proportions established, you can place the end of the sternum halfway down the rib cage, and construct the thoracic arch below it. Don’t forget to define the edge between the front plane and side plane of the rib cage.

05. How to simplify the pelvis

Okay, this one looks complicated, I know, but that makes simplifying all the more important. On a guy, it’s roughly the same width as the rib cage and about as tall as the head. The female pelvis is wider and shorter. Keeping those proportions in mind, the pelvis is essentially a bucket. Take out a wedge from the front of the bucket to define the pubic symphysis and the front of the iliac crest. You can continue to shave sections off piece by piece to articulate a perfect pelvis.

06. How to master muscles

To master a muscle, you should study its origin, insertion, function, antagonist and form. The origin is where the muscle attaches on the more central or stationary part of the body, and the insertion is the attachment on the outer or more movable part of the body. When the muscle contracts, it pulls the insertion closer to the origin. The most important aspect to study is the form. When you understand muscle in three dimensions (including its major planes changes and where it’s the thinnest and thickest) you’ll be able to draw it from any angle, and under any lighting conditions.

As you already know, muscles contract to pull the insertion closer to the origin. They aren’t capable of relaxing by themselves, so they need an antagonist to pull in the opposite direction and stretch them back out. The bicep bends the arm (flexion), and the tricep straightens the arm (extension). Understanding muscles’ functions helps you draw a natural-looking figure by flexing and relaxing the muscles appropriately for that pose. Avoid the constipated bodybuilder look.

08. How to define the muscle groups

Neighbouring muscles with similar functions can be grouped together. When the muscles are flexed they’ll pop out and be individually distinct. But if they’re relaxed at the same time, they’ll blend into one big, smooth form. For example, the quads of the leg (rectus femoris, vastus lateralis, vastus intermedius and vastus medialis) can be grouped together into one form. Use these opportunities for simplifying anatomy to create a balance of active and passive areas in your drawings.

Let's take a step back and look at what makes up a muscle. The red muscle fibre is what shortens when the muscle is flexed. It doesn't directly attach to the bone, but rather, it attaches to a middleman material called a tendon. Tendons can't shorten or stretch like muscles can. They simply tape muscle to bone. When the muscle fibres are contracted and bulging, the tendon will often appear as flat depression or furrow.

People are born with different lengths of muscle versus tendon. It’s a subtle difference that will affect how long and elegant, or abrupt and angular, their muscles look. With long muscles, when the muscle is flexed, it will appear smooth and graceful. Long tendons means there’s less room for the muscle. They’ll have a sudden start and end, appearing like mountain ranges. Compare different bodybuilders to see this effect in action.

Ready to practise muscles? A great exercise is called anatomy tracing, where you chart the muscles on top of a photo reference. It’s a little easier for beginners because you don’t have to juggle many drawing factors at once and can focus on recognising and accurately placing muscles. When you get comfortable with that, crank it up a notch and invent the muscles from your imagination on top of a skeleton reference. You can draw the skeleton yourself, or use the mobile app Skelly, a poseable anatomy model, to quickly pose an accurate reference to draw on.

Let’s learn a muscle. The pectoralis major’s form is akin to a flat box, tucked into the corner of the collarbones  and sternum. Its three distinct portions (the clavicular, sternal and abdominal) overlap each other in a folding fan pattern, and twist over each other where the muscle pulls from the rib cage to insert on the arm. When the pecs flex, its muscular bundles become easy to see on the surface form. Fat gathers on top of the pecs along the outer-bottom corner in a crescent shape, and gives the pecs a distinct edge.

Think of the breasts as water balloons rather than spheres. Show gravity in your drawings by letting the breasts hang or wrap around the rib cage, depending on the pose. Keep in mind that the pectoralis major lies underneath. The pecs are easy to see where the breast tissue thins, on the upper chest and near the armpits. If the pecs are flexed, you’ll see pec bundles, even on non-muscular women.

14. Putting some back into it

The upper back is an intimidating area. You have numerous shoulder muscles to learn to draw, going from the shoulder blade to the armpit, creating a bunch of thin tube-like forms. The shoulder has the widest range of motion of any joint in your body and it needs all those small muscles for that. The big masses of the back are the trapezius along the neck and upper back, erector spinae, which follows the length of the spine, and latissimus dorsi, which gives the torso that V-shape.

15. Decide on how much fat and how much muscle?

Have you ever seen a skinny guy with a six-pack? Or have you ever spotted a very strong wrestler with a bit of a belly on him? I certainly have. Fat develops on top of muscle. Even a thin layer of fat will smooth over muscular definition and soften the form. Body types are not a matter of fat or muscular, but “how much fat?” and “how much muscle?” Using those two factors together, you can create a variety of body types for a range of characters.

This article was originally published in ImagineFX magazine issue 135. Buy it here.