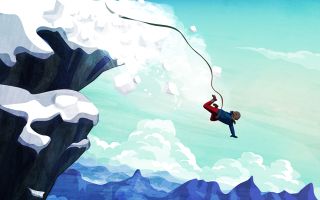 If the most dangerous thing you've done today has been to put some slightly out-of-date milk on your cornflakes, these amazing illustrations by Kerry Hyndman might inspire you to spice up your life with a little more risk.

They come from Survivors: Extraordinary Tales from the Wild and Beyond, a book Hyndman worked on with writer David Long. It's a collection of 23 real-life stories of survival from around the world, in which the protagonists have fought for their lives against the elements – and lived to tell the tale.

Some of the stories will be familiar to you, such as Ernest Shackleton's death-defying South Pole expedition, and the close shave with a grizzly bear that inspired the film The Revenant. Others are less well-known, including the tale of a teenage girl who survived a plane crash and trekked through the Amazon rainforest to safety.

The aim of the collection is to inspire children and help them understand how far self-belief and bravery took these adventurers, and how far it could take them too. It's just been unveiled as the winner of the 2017 Blue Peter Book Award for 'best book with facts'.

Hyndman, a keen snowboarder who's no stranger to adventure herself, has brought these inspiring tales to life with a series of dramatic illustrations that focus on the scale and intensity of the book's various landscapes. She's also worked with her brother, filmmaker/animator Alex Hyndman, to create an animation based on one of her illustrations (you can watch it above).

Kerry Hyndman talks us through her 10 favourite illustrations...

Juliane Koepcke: The girl who fell from the sky (Peru, 1971)

"Juliane was the sole survivor of a plane crash and ended up walking and swimming through the jungle to try and reach safety. She decided the safest thing to do was to swim and walk down the river. By using an overhead angle I could show the density of the jungle she was in and add a poisonous snake to show the risks she was facing."

Claudio Corti: The climber who was snatched from the wall of death (Switzerland, 1957)

"Mountain climber Claudio had a lucky escape when he injured himself climbing up the north face of the Eiger. I've illustrated the moment he loses him grip while climbing up a particularly steep and dangerous section. I wanted to highlight his perilous climb and show him clinging on to the mountain with the rest of the Alps rising up below him. After creating this illustration I made a short animation of the scene."

Tami Oldham: The woman who sailed into a hurricane (Pacific Ocean, 1983)

"I really enjoyed illustrating this story. Tami's fiancé gets knocked overboard in a massive storm in the middle of the Pacific Ocean. She gives up hope of ever reaching home and resigns herself to death. But after a while she's still alive and decides to fix up the broken mast and sail her boat back through a hurricane to safety. I used a lot of paint and splashy ink textures to create this illustration. I wanted to make the tiny broken boat look fragile and dwarfed by the powerful waves, but it was also important to make it seem like the vessel was holding its own and powering on through the waves to reach home."

John Capes: The survivor no one believed (Greece, 1941)

"This is a great story about an incident that people thought was so impossible that it wasn't until after the man involved died that people realised he was telling the truth! The scale in this illustration was so important as I needed to show the unbelievable feat of swimming up from a submarine so far below the surface of the sea. I really enjoyed playing around with the textures of the water, bubbles and fish."

Hans Peter Strelczyk and Günter Wetzel: The friends who crossed the border by balloon (Germany, 1979)

"This story is about two German families who tried to cross the Berlin Wall in 1979 by building their own hot air balloon and flying high over the watchtowers to avoid detection. It was important to show the tiny balloon high above the ominous, seeking searchlights to show how dangerously high up the families had to travel to avoid detection and how terrifying it must have been to put so much trust in a flimsy homemade balloon!"

Poon Lim: The man who sucked blood from a shark (Atlantic Ocean, 1945)

"Poon was left stranded in the middle of the Atlantic Ocean but with just a few basic tools he managed to survive by catching and eating birds and fish. Other than dehydration, exposure and starvation, the main danger was the sharks. I wanted to show these guys lurking under the surface by the boat, ready to strike! I got to use lots of painterly textures and hand-drawn elements to create the waves."

Ernest Shackleton: The commander who saved his crew (Antarctica, 1914)

"The story of Shackleton and his crew getting stranded on an expedition to the South Pole is fairly well known. The crew spent a lot of time trying to stay warm and fed while they waited to be rescued so I chose to draw a spread of the barren landscape. The crew and dogs in the foreground are trying to keep warm around a fire while the unforgiving landscape around them slowly crushes their ship in the ice sheets."

Mauro Prosperi: The desert runner who drank his own wee (Sahara, 1994)

"This guy ended up getting lost in the Sahara during a sandstorm while competing in a running race, and had to try and survive with very little water. It was important to show Mauro's exhaustion and depict the heat of the midday sun bearing down on him. Contrasting the scale of his isolated body in the vast desert helped add to the sense of him being utterly lost in the world's largest desert."

Colby Coombs: The mountaineer who overcame an avalanche (Alaska, 1992)

"This story is about Colby Coombs, who ended up dangling from a safety line in the Alaskan mountains after an avalanche. I really wanted to get a lot of movement into this spread. The powerful avalanche ended up throwing Colby over the edge of a cliff and I wanted to catch that moment. Again I used lots of painterly textures and splashed ink to build up the snowy elements and add to the sense of movement in the image."

"After a number of bad decisions, Eric ended up having to survive on the side of a mountain for days. Things got really bad when he fell in the river, leaving him freezing and totally lost. This is the moment I chose to depict – just as he has dragged his body out of the frozen river, looking helpless and exhausted in the snowy landscape."

The hardest thing about the commission was keeping it exciting while ensuring it was still suitable for children. "I found the main challenge was to create enough variety in the illustrations while finding angles to draw that didn't show too much blood and gore, as some of the tales are pretty gritty!" she says.

Hyndman created all of her illustrations digitally, using Illustrator to draw out the compositions and then finishing them off in Photoshop with a combination of photographs, scans and hand-drawn textures.

"This was such a dream commission for me," she says. "I got to research and draw some awe-inspiring scenes in epic mountain ranges and snowy tundra, which are some of my favourite things to draw!"

'Survivors: Extraordinary Tales from the Wild and Beyond' is available now from Faber & Faber.