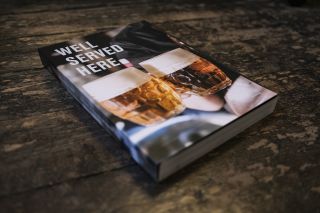 For many people, beer is one of life's essential pleasures. Whether it's sipped as a treat at the end of the working week or downed at the start of a night out, beer is always there to help you enjoy the good times. To celebrate the intricate art of pouring the perfect pint, Purple Creative have released this mouth-watering coffee table book.

Filled with photographs printed in such high image resolution you'll want to lift them out of the pages, Well Served Here is a beautifully produced book that focusses on the success of Pilsner Urquell Tankovna beer and the people who have been trained to pour it perfectly over the last five years.

For those not in the know, Tankovna is unpasteurised beer delivered direct to bars within 48 hours of the brewery in Pilzen. Pilsner Urqell beer forgoes traditional packaging conventions and serving methods, choosing to favour steel tanks when it comes to storing their precious beverage.

Purple have been involved with the project from day one, including work on a global brand identity, running workshops, and activating on and off-trade strategies. On top of this, of course, was the research, creation and production of Well Served Here, which is being shared with present and future Tankovna bars. The book is also given as a tool to potential and future tank bars in order to inspire, create a business case and show the importance of craft for Pilsner Urqell tank bars.

The hefty A4 book runs to just shy of 400 pages and takes readers on a tour of Europe's best PU tank bars. On their way, readers will learn about the history of unpasteurised Tankovna beer, learn the craftsmanship that goes into serving it, and even meet the expert staff in a series of entertaining interviews.

Readers will come away with a greater awareness of the drink, which is more than the preserve of the trendiest of hipsters, and have their appetites whetted by over 16,000 stunning photographs of beer.

Taking its name from the tin signs owners would proudly display in their bars, Well Served Here has been specially written so that all of the content is easy to digest and share in other media channels.

"This has been a once in a career project," reveals co-founder and creative director of Purple Creative, Steve Bewick. "Pilsner Urquell started a beer revolution and it’s still being revolutionary today. Since 2011, we’ve helped the brand transition from an over marketed ‘me too beer’, to one built on its truths.

"The strategy has been to target beer drinkers that give a shit about where things come from and how things are made, rather than people that don’t really care. This came at exactly the right time, as the US craft beer movement expanded across the globe. This five-year project has resulted in increased market share, but it has also made the brand relevant again and put it back in its rightful place as the grandfather of all Pilsner style beers.

"And all we’ve really had to do is tell the truth. This turned out to be easier said than done and a massive challenge to traditional ways of marketing. The global marketing team were up for that challenge and we’ve worked closely with them on every aspect of the brand to achieve success. You name it, Purple has done it."