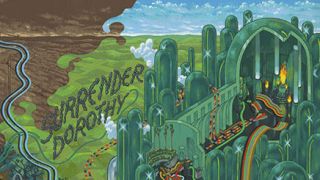 The likes of The Wizard of Oz and Guardians of the Galaxy have been transformed into wonderfully detailed maps in this series of illustrations by freelance illustrator and artist Andrew DeGraff.

Over the years we've seen artists reimagine their favourite films in weird in wonderful ways. From comics that wonder how smartphones could change the plots of classic films to a range of art prints that recreate fictional boarding passes, it seems that there's no limit to how creatives can reinterpret their most loved movies.

But we've never seen anything quite like these maps by DeGraff before. They remind us of London's famous underground map (which itself has been reimagined many times) thanks to their colourful routes, which track the movements of the main characters in films.

To get a taste of DeGraff's maps, check out these examples inspired by some of the biggest movies around. First up is everyone's favourite dinosaur disaster flick, Jurassic Park.

We love the attention to detail in these maps. Not content with just tracking the general routes of the characters, DeGraff has been thorough and included instances where the action moves back and forth in a scene.

Remember that bit in Jurassic Park where sleazy smuggler Dennis Nedry struggles to free his car from the mud so he has to wrestle with a winch before getting killed by a Dilophosaurus? That makes it to the map. Just follow the yellow line.

Doing justice to the beautiful maps in Tolkein's Lord of the Rings Books, the map above shows the paths that the ring travelled throughout the three main books, The Fellowship of the Ring, The Two Towers, The Return of the King.

De Graff's website shows close ups of this image's stunning details, such as the towers of Minas Tirith (below).

DeGraff's site also gives an insight into his process, showing this massive 52.5 x 30-inch piece taking shape from a pencil sketch to the finished, detailed piece.

This sprawling map for the first Guardians of the Galaxy film does a great job of bringing the massive space opera into one image that viewers can navigate.

But our favourite detail is the little purple arrow that shows Thanos swivelling round in his chair. It's the only movement he makes in the film, but even that makes it to the map.

This Wizard of Oz illustration might be our favourite map of the lot. There's so much going on, from the transition to black and white Kansas, to the circling route of the house as Dorothy and Toto spin through the tornado.

If you like these maps you'll be over the moon to hear that DeGraff is featuring these illustrations plus many more in a new book called Cinemaps. Not only that, but his work will be featured in an art show at Gallery 1988 in Los Angeles, CA, kicking off today.