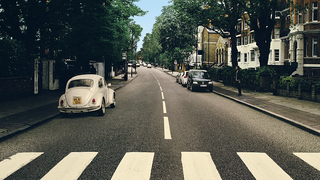 To celebrate Abbey Road's 50th anniversary, a clever redesign of the iconic Beatles album cover has fixed a dodgy piece of parking that's been invading the pavement for half a century. And while it's a neat redux, it's also subtle but worthy print ad for Volkswagen.

If you're not familiar with the album cover, it sees the Fab Four walking on a pedestrian crossing near Abbey Road Studios. But if you look in the background, you'll spot a hastily parked white VW Beetle obstructing the pavement.

Created in partnership between VW and Nord DDB Sweden, the new Reparked Edition sees the car finally shift a few feet to the right and park correctly. And it's not just because VW wanted to swerve into the cultural conversation surrounding the anniversary. The automaker also wanted to promote its Park Assist technology, which makes it easier to parallel park.

What's more, this ad wasn't just dashed off in a couple of minutes in Photoshop. It's a slick recreation that's even being sold as a print, with the profits being donated to Swedish children's rights nonprofit, Bris.

See how it compares to the original Abbey Road cover, below.

"We want to show how far our technology has come since that little parking mishap, so that no one else has to live with a constant reminder of their parking fail."

So if you've ever worried that you take too long to park, console yourself with the fact that at least it didn't take you five decades.