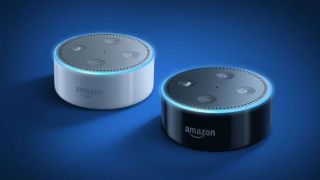 In a world-first, Amazon has partnered with the UK's health service, the NHS. From this week, its voice-controlled device, Alexa, will give out health advice, and answer common questions such as 'Alexa, how do I treat a migraine?' and 'Alexa, what are the symptoms of chickenpox?'

In response to health-related queries, Alexa will now search the NHS Choices website for health information (and there you were thinking Amazon was all about Prime Day deals). The aim is to ease pressure on the NHS and help those who can't easily access information on the internet – such as the elderly or blind people.

As we've previously explored, the use of voice interfaces is one of the fastest growing web design trends in recent years, but so far the news has been met with concerns over the appropriateness of using Alexa to deliver this kind of important and sensitive information. Will this partnership with Amazon really end up easing pressure on the health service, or will it lead to data protection issues and misdiagnoses?

The health secretary, Matt Hancock, was optimistic about the partnership: “Technology like this is a great example of how people can access reliable, world-leading NHS advice from the comfort of their home, reducing the pressure on our hardworking GPs and pharmacists,” he said.

Of course, users wouldn't normally be able to access Alexa if they didn't already have an Amazon device such as Amazon Echo (see our guide to Amazon devices), but The Department of Health has said that access will be given through a free app.

On Twitter, the reaction was mixed (okay, we mean negative), with users citing all sorts of concerns, including the functionality of Alexa, data protection worries – no doubt referencing this year's news that Amazon employees listen to recordings in order to develop new services – and questioning the government's priorities.

Alexa can’t even play the right music on request 🤣We think the Health Secretary should stop spending all his time messing around with gizmos and start addressing the real issues in our NHS, like funding and staffing levelsPlease RT if you do toohttps://t.co/7R6jHdATHaJuly 10, 2019

Others joked about the potential implications of people relying on Alexa for health advice.

"Alexa... my heart""Playing achy breaky heart""No... I'm having a heart attack""Art attack is a 90s children's TV show...""Alexa my arm is sore""New alarm set for four""Alexa for the love of fuck call me an ambulance""Thank you, I will now refer to you as an ambulance"July 10, 2019

My Alexa barely understands me when I ask it to turn the kettle on. https://t.co/iAPrgao87qJuly 10, 2019

The deputy leader of the Labour party, Tom Watson, spoke about the dangers of mixing NHS data with big tech companies.

The giant data monopolies want one thing: more and more data to drive their huge profits. Entrusting Amazon's Alexa to dispense health advice to patients simply opens the door to the holy grail - our NHS data. This is the beginning of a Mission Creep.https://t.co/UXN05bHMZUJuly 10, 2019

While others pointed out that Alexa dealing with queries isn't much different to typing them into Google.

I'm all for increasing access to medical info. & while I understand people's concerns, I'm not seeing how this is diff from medical qs users have been asking Alexa since 2014, or how it's diff from medical qs they've been entering in Google with Chrome signed into their acct.July 10, 2019

According to the BBC, talks are also underway to set up similar partnerships with other companies, such as Microsoft. Which shows that yet again, Amazon is leading the way. Whether or not it will be able to really help those with minor health complaints remains to be seen.