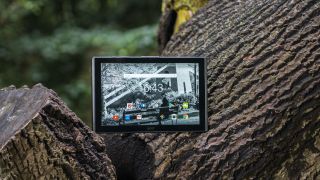 Got an eye for a bargain? If so, it won't have passed you by that Black Friday 2018 is upon us. Now is the perfect opportunity to stock up your studio with discounted kit, or just to save money on some early Christmas shopping.

And if you're hoping to upgrade your knackered old tablet this year, you can now do it on the cheap. The Black Friday bargains have been popping up for the past few weeks, but the best deals can usually be found on the day itself. Read on to see if the tablet you've had your eye on has gone down in price. If you do see a great deal for your needs, hit the Buy button – the best bargains haven't been sticking around for long.

Wacom Intuos Pro, large: $399.95
Save $100: This new model for Mac and PC is Wacom's finest creative pen tablet to date. With 8,192 levels of pressure it takes the professional standard of pen tablets to a whole new level.

Let's start with the obvious bit: if you're thinking about Black Friday tablet deals, chances are that you're thinking about getting an iPad, right? If that's the case then you should head to our page on the best Black Friday and Cyber Monday iPad deals; be aware, though, that Apple's not known for handing out massive discounts, so stay here for the facts on bigger savings from other brands.

Beyond the iPad, we're expecting some big discounts on the Microsoft Surface Pro 4; it saw some big price drops last year and with the new Surface Pro on sale we're likely to see even bigger discounts this time around. It's an ideal tablet for creatives, with its Surface Pen, optional Type Cover and a 12.3-inch 2,736 x 1,824 screen. Even with a discount it's not exactly going to be cheap, and its battery life isn’t the best, but if it's power you need than you can't go far wrong.

Amazon, of course, is always a good bet for Black Friday tablet offers. If you're after something cheap and cheerful then its 2017 Fire HD 8 would be a good punt; its standard prices start at $80/£80, and we'd expect it to drop to around the $60/$60 on Black Friday. For something a bit more powerful, look out for discounts on the 2017 Fire HD 10.

For Black Friday Samsung tablet deals, the Galaxy Tab S2 looks like another good bet; it's been discounted before, and with the Galaxy Tab S3 now on sale we'd be expecting retailers to be looking for a good excuse to run down their S2 stocks. It's a decent little iPad alternative that’s thin and light with a sharp Super AMOLED display that makes it ideal for creatives, and while the specs are firmly in the mid range it's easy to upgrade the storage with a microSD card.

If you're serious about your tablets, though, don't forget about Wacom; last year we saw some massive price cuts on everything from top-end Cintiqs through to the Intuos Pro and Bamboo Spark, and we'd hope to see similar discounts in 2018.

If you want an idea of the sort of offers you can expect to find this year, check out some of last year's deals.

Microsoft Surface Book – $1547 (was $2699)
The Surface Book is a great compromise if you're not sure whether you need a tablet or a laptop, and this high-end model was available at over $1,000 off, thanks to the launch of the Surface Book 2.

Wacom Intuos Pro: $299.95 (normally $349.95)
If you're mainly interested in a tablet for drawing or sketching, the Intuos Pro is an excellent choice, and Amazon knocked $50 off its price for Black Friday and Cyber Monday last year.

Huawei MateBook E – $499.99 (usually $799.99)
Amazon took $300 off the price of this nifty Windows 10 2-in-1 tablet last year; if you'd rather be running full-size desktop applications without paying a premium, it's a brilliant choice.

It wasn't just the Americans getting all the bargains; here are some of last year's top UK Black Friday tablet discounts.

Acer B1-850 Iconia One – £89.99 (was £109.99)
With expandable storage and fantastic battery life, the Iconia One is ideal for entertaining and browsing on the go, although you wouldn't want to rely on it for anything heavyweight. With £20 off from Currys, who's complaining?

Wacom Cintiq 27QHD Creative Pen Display refurbished: £1,429.99 (was £2,099.99)
Now we're talking. This refurbished Cintiq 27QHD comes complete with a Pro Pen, and with £670 knocked off the price in the Wacom store, you'd be hard pushed to find  a better bargain for the serious digital artist.

If you're serious about getting a great Black Friday tablet deal then it's best to be prepared and start seeking out the bargains well in advance. There's a lot more competition between retailers these days, and many of them will jump the gun and get their special offers on sale well in advance of the big day, so keep checking back here for the latest deals.

For a wider choice and better deals, don't restrict yourself to one outlet. Obviously Amazon's the obvious place to look, but if you check out other retailers then you could easily find an Amazon-beating price for the tablet you want. If you're in the States then Walmart and Newegg are great places to look, while Argos, Currys PC World and John Lewis are likely to have some sweet deals in the UK. And be sure to check out manufacturers' own online stores, too.

Have a good idea of exactly what kind of tablet you want and how much you want to pay for it. If you need a tablet for drawing or other graphics work, then you'll have to be prepared to pay a premium for it, but if all you need is something you can send emails on and maybe watch a video or listen to tunes on your commute, you can get away with something a lot cheaper.

And of course, take as much care on Black Friday as you would with any other expensive purchase; look out for cashback offers that'll give you a bit more of a bargain, read the guarantee to make sure you're covered if anything goes wrong, and keep your receipt; there are any number of reasons why you might change your mind and want a refund.

Tablet features creatives should look out for on Black Friday

What's really going to matter to creatives when it comes to Black Friday tablet deals is the quality of the display; the last thing you want to be saddled with is a tablet with poor resolution, brightness and contrast, especially if you're planning to use it as a handy means of showing off your work to potential clients. Ideally you'll want at least a 1080P HD display; check the tablet specs for details on contrast and brightness.

Battery life is another indicator to be aware of; cheaper tablets will often be lacking in the battery department, and you don't want to find yourself running out of juice by lunchtime. Of course if you're happy to have your tablet plugged in a lot of the time then this needn't be an issue, but it's something to be aware of.

The easiest thing to look for, though, is a brand name you recognise. With the likes of Apple, Samsung, Wacom and Microsoft you can be fairly sure that you won't go far wrong; an inviting-looking tablet at a knockdown price from a company you've never heard of is likely to be a recipe for disaster, or at least disappointment.

What specs creatives should look out for

As far as specs are concerned, it comes down to three things: memory, CPU and storage. Try to get the best you can in all three departments.

Tablets are less demanding than laptops, but they'll still struggle without enough memory, so don't even think about anything with under 2GB. 3GB is a good benchmark to aim for, but if you're thinking about a tablet running Windows 10 then you should look for something with at least 4GB if you want everything to run smoothly.

CPU-wise, look for a quad-core chipset, and if you're after an iPad then be sure it has at least an A8 chipset running the show. And as for storage, get as much as you can; 16GB will fill up pretty quickly, and if you're likely to be stashing your tablet with high-res artwork or video then aim for 128GB or even 256GB. And remember that some tablets feature MicroSD slots so you can add to the base storage.

A top Android tablet, complete with a stylus

For an all-in-one creative solution, the Samsung Galaxy S3 ticks all the boxes. It's pretty much the best Android tablet with a stylus, making it perfect for drawing and note-taking, and its 9.7mm screen, 6mm thickness and light weight make for an ideal form factor. It also boasts an HDR-enabled screen – just the thing for when you want to turn your quick sketches into something more pleasing.

It only features 32GB of onboard storage, so you're likely to have to resort to cloud options if you've been working it hard, but the great news is that its S-Pen stylus is included in the price.

Why have both a laptop and a tablet?

If you're torn between a laptop and a tablet then the brilliant Microsoft Surface Pro ought to fit the bill just perfectly. Packing an Intel Core i7 Kaby Lake CPU, 512GB SSD storage and a 2,736 x 1,824 resolution PixelSense display, it's a serious workhorse that can easily cope with whatever work you need to do on it, and all on full Windows 10 apps too.

The only downside is that the Surface Pen isn't included in the deal any more, so if you want to draw on your Surface Pro with 4,096 pressure levels, you'll have to spend an extra $100/£100 for the privilege.

Can't run to the price of a serious creative tablet? That's okay, because as long as you're not too bothered about performance then the Huawei Mediapad M3 8 should suit you nicely. It packs quite a bit into its lightweight aluminium frame, including a top quality screen and just enough power to cope with less demanding apps, and it offers a decent battery life that shouldn't let you down.

It doesn't come with a stylus, but if you're prepared to spend the extra then you'll find it's just the thing for drawing or sketching on the go, but you'll probably need to give your work a final polish on the desktop.

Can't wait for Black Friday? Don't worry, there are already plenty of great deals on offer; here are some of the best.