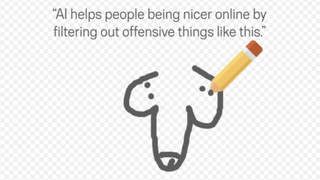 Doodling a penis is something lots of people did at school, probably in the margins of an exercise book as they killed time in a boring lesson. But in the latest project from interactive design studio, Moniker, drawing the male member has become a way to rebel against automated censorship systems used by the likes of Google.

If you've been amazed by the creations in our round up of the best doodle art and you want to have a sketch, this project is the perfect opportunity for artists of every level to put their skills to good use.

Created by Amsterdam-based studio Moniker with support from Mozilla, Do Not Draw A Penis is a witty drawing tool that kicks back against Google's open-sourced Quickdraw data set. That's because while the search engine's self-described "world's largest doodling data set" contains lots of family friendly sketches, there's not a single penis to be found.

"This made us at Moniker think about the moral reality big tech companies are imposing on our global community and that most people willingly accept this," says the studio on the Do Not Draw A Penis project page.

To combat this censorship, Do Not Draw A Penis has been collecting phallic doodles from rebellious users.

When you head over to site, you'll be presented with a blank canvas just waiting for you to doodle a masterpiece with the pencil tool. A soothing HAL 9000-sounding AI moderator will narrate your sketches and provide motivational support. If you draw, say, a house, the voice might encourage you by saying it's full of character.

But when you decide to ignore the site's name and draw a penis, a warning alert will flash up on screen and the eraser tool will automatically leap into action to scrub out the offending doodle. The AI moderator even becomes more stern and chillingly observes, "we assume this was a mistake, sorry," as it rubs out your sketch.

It's a funny and effective way to highlight how site's can control what they deem to be inappropriate, and so far the Do Not Draw A Penis project has collected more than ten thousand penis doodles.

Moniker has even compiled the drawings in a data set that's formatted in the same way as Google's Quickdraw. If you want to take a look at this sketchy sausage fest, you can download it from this Github repository.

And if you want to support this project even further, you can order a tea towel decorated with 5,000 unique penis doodles from Moniker's webshop.