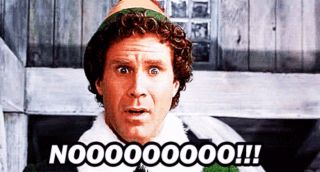 Who needs to waste time with words or a static image when you can use a GIF to express yourself? GIFs are easy to share and easy to consume. They are cute, funny and popular plus they instantly engage. What more could you want?

Google got involved in the world of GIFs last year when it acquired the GIF-sharing service, Tenor. With 300 million monthly visitors and over 12 billion (yes, billion) searches every single month, Tenor also powers GIF search in Google products. This includes Google Images and the popular apps Twitter, WhatsApp and Facebook. (If you're on the lookout for some other great free iPhone apps then try this selection for designers.)

This list of the greatest GIFs was created using data from Tenor's GIF Keyboard iOS app. Sorry Android people but there isn't one for you yet.

Who's number one? Keep reading to find out. (Hint: it isn't a cat).

Poor old Stitch (of Lilo and Stitch fame). He's not looking happy, but this GIF offers more than one simple emotion which is probably why it's so popular. He's frustrated, mad, upset and annoyed. He just wants to be alone. And he's not the only one.

This one is all about the unmistakeable talents of rubber-faced comedian, Jim Carrey. In this scene from Liar Liar, Carey is frustrated, very frustrated, and you can tell 'cause he's pulling his hair out.

Rain rarely makes anyone happy, and Stitch (of Lilo and Stitch fame) is looking sadder (and wetter) than ever. With his ears down, a quivering lip and a tear in his eye he is miserable – but adorable.

Those crazy incomprehensible minions make everyone giggle. Providing the humour in children's film Despicable Me, the minions have been known to make children (and some adults – sorry to the people in front of us at the cinema) spit their own popcorn out with laughter. So this GIF is delightfully apt.

Elf's Will Ferrell can't believe it. His dad is a miserable old cynic and so are most of the New Yorkers he meets on his journey. You can see the disappointment in his face.

A super-fun selection, and this only the top five. So who else made the top ten? Well, there's a WOW from Mark Wahlberg's not-so-cute-and-cuddly sidekick TED and a fierce "Oh Snap" from the Fresh Prince of Bel-Air, to name just two.

And the fun doesn't stop there. Google also identified the top trending GIF expressions used in North America in 2019. It includes a "Psh" from YouTuber Ed Bassmaster, and "Peasants" inspired by Game of Thrones. But our favourite has to be the incredibly cringeworthy Dad Joke. We won't spoil it and tell you more, but you can find out for yourself by taking a peek at the complete list. Enjoy.