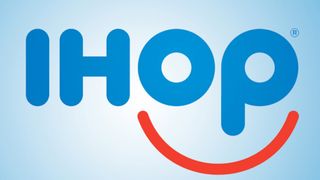 Breakfast food chain IHOP is up to its tricks again. You may remember last year the International House of Pancakes ruffled a few online feathers when it suggested that it was going to change its name to IHOb in reference to the burgers it added to its menu. Well it appears to be pulling a similar publicity stunt, this time centred around the letter 'P'.

Anyone who's put together a meticulous design style guide will be aware that changing a logo this frequently could confuse and irritate audiences. And they would be right. The internet is a bit tired of IHOP's antics.

It all kicked off earlier this week when IHOP posted a cryptic tweet that saw the temporary IHOb logo flip back to a 'P', accompanied by the message "we heard you". This is a reference to the backlash generated by last year's IHOP marketing campaign.

Last year, the Internet had a lot to say about IHOb. Well, we heard you. Stay tuned for June 3. #IHOP pic.twitter.com/ycbk0rKAY8May 28, 2019

As it turned out, IHOb was just a fleeting rebrand that was designed to create a buzz around its new burgers. And it worked. Sales quadrupled during the fiscal quarter that IHOP was IHOb.

Shortly after the "we heard you" tweet, IHOP teased audiences even more with another status that promised to reveal all on 3 June. This video saw a flurry of angry messages in response to IHOb fly towards the viewer, each reminding us that IHOP should 'stay in its lane' and focus on what it's good at. Namely: pancakes.

Just as last year's stunt whipped up speculation as to what the letter 'b' in IHOb could stand for, social media users were quick to offer their suggestions as to what 'P' could mean. As it turns out, there were plenty of NSFW ideas, some of which are included below.

At the time of writing, it remains to be seen what the 'P' will stand for. Could IHOP be granting the wishes of its angry audience by revealing that it does, in fact, stand for pancakes? It would be a bit of a troll move, and we don't imagine IHOP would throw away this publicity on revealing that nothing has changed.

Perhaps it could be another reference to a new product. Pies, perhaps? It could even be hinting at a new service. Personalised pancakes anyone? Either way, we don't have to wait too long, as IHOP promises to let us know what 'P' stands for on 3 June.