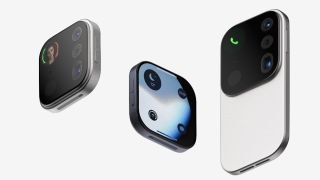 We've seen lots of concepts for future iPhone designs, but every now and then, one comes along that truly captures our imagination. This new concept from a German industrial design student certainly falls into that category – its detachable camera setup is unlike anything we've seen.

Louis Berger's concept, named Mosaic, features a huge camera bump which can be removed, and function independently. With its small, square display, this separate device looks a little like an oversized Apple Watch. We've no doubt this concept ever became a reality, it would secure a spot in our round up of the best camera phones money can buy.

A modular iPhone might sound unusual, but Berger's polished 3D imagery makes it look truly premium (check out the best 3D modelling software if you're inspired to create a concept of your own).

While huge camera bumps are often seen as an unfortunate design trade-off as smartphone photography becomes more advanced, Berger's ingenious design seems to take the idea to its logical conclusion – by making the camera bump (or "photo tile") the phone itself. Users can then attach a secondary "screen tile" to the back, either the same tiny size, or a larger one which transforms Mosaic into a traditional smartphone. Confused? Berger's handy illustration (below) explains the radical new concept.

Berger's concept imagines a much more versatile device – users could choose between a standard smartphone-sized device for consuming content, and switch to the smaller mode (below) when exercising, for example. It's like having an iPhone and an Apple Watch in one.

While we've seen many rumour-based concepts of what the next iPhone might look like (spoiler alert: not that different to the iPhone 11), it's a treat to see designs that hint at what the more distant future could hold – such as this jaw-dropping folding iPhone concept. After all, it's been a while since we've seen Apple drop a product as innovative and brand new as the original iPhone, iPad or Apple Watch. But the upcoming Apple Glass could soon change that.