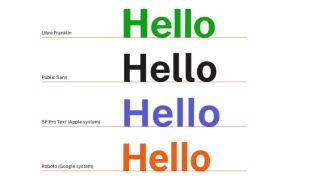 The United States federal government might not seem like the most obvious source of good type design, however its recently launched design framework includes a free font that could be a practical alternative for designers bored of using Helvetica: Public Sans.

Released by the General Services Administration, an independent branch of the US government responsible for facilitating the work of federal agencies, Public Sans is a clean and neutral typeface that's part of a new design framework for government websites.

As a bespoke typeface, Public Sans is based on Libre Franklin, which itself is a modern open source version of the much older Franklin Gothic. To try and recapture the tone of the classic Franklins, the design team removed the rounded terminals from the Libre Franklin typeface. The result is a sharper design with a more institutional feel, making Public Sans a perfect fit for government websites.

Besides being a crisp and straightforward font, Public Sans will also support the use of custom typefaces on US government websites. This is because custom typefaces will be normalised to the optical size of Public Sans, which will ensure that the balance of the type hierarchy remains similar.

While the launch of Public Sans is great news for designers working inside the US government, the decision to release it under the SIL Open Font License means that creators outside of the federal government will be able to add the typeface to their roster of fonts without having to pay.

With its crisp styling and nine line weights, Public Sans has all the makings of a neutral and sophisticated typeface that's sure to go down well with designers. It's also not the first font to come out of a US Web Design System. Previous typefaces developed out-of-house include the popular Source Sans Pro and Roboto.