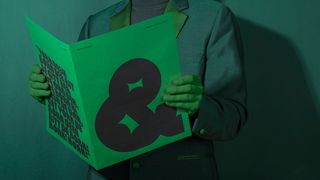 Here's a fun font that will have you joyfully flailing your arms in the air like the famous amphibian muppet. Meet Kernit, a free font set inspired by the work and characters of the legendary muppet master himself, Jim Henson.

Nope, that's not a typo, Kernit gets its name from a witty mashup of Kermit the Frog and kerning. But then again you probably figured that out for yourself. (It took us a couple of passes before we noticed it, ahem.)

Developed by independent brand experience company COLLINS and MCKL, Kernit was created to capture the sense of fun and whimsy that Henson's world has become know for. According to the designers, "it was also inspired by the bold, playful, rounded typography of the late seventies, which was so apparent in much of the Henson work."

Available in two weights, Kernit Bold and Kernit Outline, the retro fonts are deisgned to be used interchangeably to give your layouts and lettering some visual rhythm. Check out Kernit in action below.

Kernit was developed as part of COLLINS' design exploration for The Jim Henson Exhibition at The Museum of the Moving Image in New York. By immersing themselves in Henson's work, including classics productions such as Dark Crystal, the COLLINS team were able to really get a handle on what it takes to make a font fit for the creator.