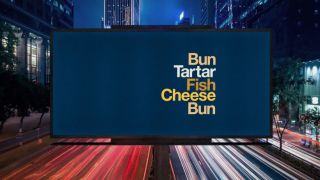 You might have thought that a brand as strong as McDonald's relies on its most famous elements – the big 'M' and bright yellow and red hues – being present, but apparently, you'd be wrong. The fast food chain's latest ads consist solely of a list of ingredients that make up its most popular offerings: "muffin, egg, sausage, cheese, muffin", for example. Or "bun, beef, gherkin, lettuce, sauce, bun, beef, cheese, lettuce, sauce, bun". The words might be in the colour of the ingredients, but there's no branding to speak of – no logo, no tagline, not even McDonald's' custom typeface. Intrigued? We thought so.

It's a risky strategy, but we bet it'll pay off; McDonald's has always been good at marketing. We've included plenty of its adverts in our best billboard ads roundup, and the chain does have form when it comes to running ads that deliberately mix up or adapt its famous golden arches. Remember those blurry ads it ran last year?

This time, McDonald's has taken things a step further. Agency Leo Burnett London and designer David Schwen are behind the ads, which are a play on a project named Type Sandwiches that Schwen created in the early 2010s. The project listed the ingredients of sandwiches in basically the same way as these new ads. They even both use Helvetica, instead of McDonald's custom typeface, Speedee.

What's interesting about these ads is that they could arguably be describing just about any burger or muffin, but somehow, we know these ingredients and these ads belong to McDonald's. Or we can at least guess they're from some super-brand, and not just a small burger company that hasn't decided on its logo yet.

While this is a bold move for McDonald's, we have to admit, its simplicity and sheer audacity kind of works. Plus, if anyone can pull off listing its ingredients on a poster without saying who they are, it's the biggest fast food chain on the planet. What more can we say? We're lovin' it.