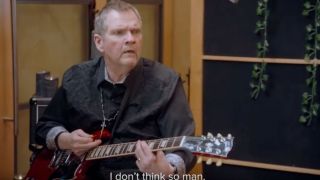 Veganuary is now officially a thing, and Italian/American restaurant chain Frankie & Benny's is trying to get in on the action with its vegan menus. Its campaign ad spot sees Meat Loaf's new manager trying to convince him to change his name to Veg Loaf. He's not impressed.

In an increasingly ridiculous bid to get Meat Loaf to agree, his team try to lure him in with food such as the Viva La Vegan burger and the No Cheese Cheesecake. Meat Loaf becomes increasingly irate. It's worth watching till the end (see video below) for the inevitable line about what Meat Loaf will and won't do. For comedy value, we think it's up there with some of the best print ads around.

The campaign was created by new agency Idea Farm and Lucky Generals, and is based on an actual pitch. "Funnily enough, our new video isn't far off the original real-life pitch to Meat," says Elise Ash, director of strategy and brand at Frankie & Benny's. "While we couldn't convince him to rebrand to Veg Loaf, we're delighted he's the headline act for our new vegan menu to help spread the word on the benefits of tucking into our meat-free dishes." Meat Loaf has apparently agreed to go plant-based for Veganuary. It was just the name-change thing he didn't want to do.

We think this is a clever piece of advertising. With more and more outfits trying to break into the vegan or veggie market, Frankie & Benny's has shown how laughing at yourself is sometimes the way to go. Of course, getting a big name to sign up helps, and one with a meat or veg-based name is even better. Might Halle Berry or Kevin Bacon be next?