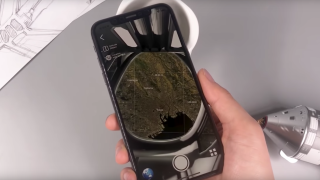 Have you ever gazed up at the night sky and wanted to look down on planet Earth from outer space? Us too. And while the sad truth is that most of us will never become astronauts, we can now look at what they see with the augmented reality NASA Space Mug.

That's because this out-of-this-world cup can be paired with a special app to show you stunning views from the International Space Station. Simply point your phone over the top of the mug to see hi-res satellite photos taken from data provided by NASA and the United States Geological Survey (USGS). It's a step up from even the best travel mugs.

NASA fans will also be pleased to see that the mug stays true to the space agency's aesthetic, which is so well outlined that its manual made our shortlist of the best design style guides. The famous NASA 'worm' logo can be seen on a crisp white protective canister, while the peculiar lumpy mug is inspired by the shape of satellites.

Take a look at the NASA Space Mug in action with the video below.

Pretty cool, huh? And with over 200 countries and 10,000 cities to view, you'll likely never get bored of peering down on the likes of the Amazon Rainforest and the Grand Canyon via the app.

The mug was released in partnership with AstroReality to commemorate 60 years since NASA was founded, and can be yours for just shy of 30 bucks when you head over to buy it from BH Photo.

This low price isn't the only bargain you'll be able to pick up over the coming weeks, either. Bookmark our guide to the best Prime Day deals to stay on top of all the discounts on creative goodies.