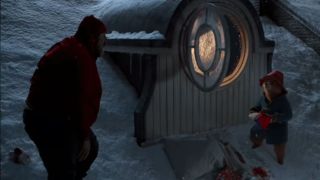 We haven't had Black Friday yet, but Marks & Spencer has already given us a taste of what to expect from its 2017 Christmas campaign by releasing its heartwarming Paddington and the Christmas Visitor ad. Featuring the marmalade-loving bear created by Michael Bond, the commercial ties into a series of in-store events, products and charity benefits.

The advert, which you can watch below, echoes the approach of the phenomenally popular John Lewis Christmas adverts. In recent years John Lewis has used penguins, dogs, and an assortment of woodland creatures to get viewers in the festive mood, and it looks like M&S wants a slice of the action.

In the ad, Paddington Bear confuses a rooftop burglar with Santa Claus thanks to the thief's sack of gifts, and the pair team up to return the pilfered presents to their rightful owners. It's such a heartwarming adventure that, by the end, the criminal has seen the error of his ways. D'awww.

Accompanied by the tagline "Spend it Well" and the hashtag #LoveTheBear, this is the first of many Christmas adverts we'll likely be seeing over the next few weeks in the run up to the big day.

The M&S campaign kicked off yesterday when the advert made its TV debut during the Pride of Britain awards on ITV. If you haven't caught the ad on TV, you can always see it at the cinema before screenings of (you guessed it) Paddington 2, which opens in British cinemas on 10 November.

Paddington and the Christmas Visitor is linked to 90 M&S products, including a £12 Paddington soft toy and a £42 duffel coat. One of the items, a £3 book, will help raise profits for the NSPCC to help fund its Childline service.

Children's book readings will be hosted in M&S stores to help promote the family-centric campaign, and staff members have been encouraged to carry out "random acts of kindness" on shoppers, such as free marmalade sandwiches in the cafe.