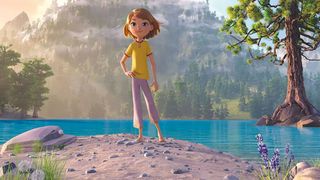 Animation companies have been using charming little clips to introduce themselves and their films for years. Just think of Pixar's hopping lamp or DreamWorks' boy lounging on a crescent moon. But now Paramount Animation has got in on the act with a new logo and mascot, which were recently revealed in a short animation.

For a company set up in 2011, the move to make a logo and mascot has been a long time coming. After all, as our guide to logo design points out, they're a crucial piece of branding that help companies connect with their audiences.

The decision to create a bespoke logo and mascot for the studio comes as Paramount Animation ramps up production, with four films expected in 2021. The project was designed by Christopher Zibach, and produced by creative agency ATK PLN and Reel FX Creative Studios.

In the animated launch clip we see the studio's appropriately named tween mascot, Star Skipper (above), as she skips a stone across a river. This stone then transforms into a star, before zooming up to reveal the new Paramount Animation logo. Check it out, below.

As far as logos go, it's very similar to the Paramount Pictures logo but with the word 'animation' written underneath in a handwriting font. The orange sunset in the background also helps to differentiate it.

Perhaps the new logo didn't need to be a massive departure from its parent company, though. The mountainous, star-encircled Paramount Pictures logo is strong enough to be tweaked and yet still remain recognisable.

The Paramount Pictures logo also contains an element which was at the core of the development of the Paramount Animations branding. Speaking to Variety, artist Christopher Zibach said "We were inspired by the idea of stars and reaching for the stars."

Speaking about the decision to make Star Skipper a female character, Zibach added: "In our operation overall, the team that we’ve put together is a majority female team, so it captures the magic of what we’re going for in the division. It's about dreaming big. When we thought about the character, we thought, why wouldn't it be female? And we wanted a girl connected to nature, in who she is and how she looks."

As for whether or not Star Skipper will one day feature in her own film, Zibach says: "Our hope is all of our movies will be successful. We'll wait and see if there are any changes with her as the movies grow. It’s a fun idea."