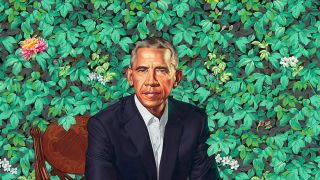 Barack and Michelle Obama returned to the limelight yesterday as their portraits were unveiled at the Smithsonian National Portrait Gallery. The event, which is usually seen as a perfunctory occasion, drew worldwide attention thanks to the portraits' striking painting techniques, which are a stark contrast to the traditionally formal depictions of American presidents.

Political commentators have noticed that the distinctive portraits reflect an unorthodox presidency that saw Obama challenge and push expectations of what could be achieved in office.

For his portrait of Barack Obama, which the man himself described as "pretty sharp", Wiley incorporated the vibrant and floral motifs that have made his name. But while the former president asked the artist to tone down some of the pomp and ceremony found in his other works, he couldn't stop the painter from staying true to life.

Wiley is the first African-American artist to paint an official presidential portrait for the National Portrait Gallery. "What I was always struck by when I saw his portraits was the degree to which they challenged our ideas of power and privilege," Obama said.

Barack Obama's life is told through the many flowers in the background of the portrait. There's the chrysanthemum, which is the official flower of Chicago, where Obama's career began. There's also a jasmine for his birthplace of Hawaii, plus African blue lilies, which are symbolic of Obama's heritage.

Meanwhile, Michelle Obama's portrait appeared more muted and understated. Depicted with a greyed-out skin tone and wearing a patterned dress with her chin resting on her hand, the former first lady claims that her portrait will herald a new era of presidential portraits.

She went on to add that the portrait will give inspirations to girls and girls of colour as they will finally be able to see people like themselves in positions of authority.

Given that the Obama presidency was seen as a boundary pushing and controversial era, it's no surprise that these portraits have provoked a similarly divisive reaction. Some were quick to attack the artists by pointing out that Wiley once painted black women decapitating white women, while others praised the breath of fresh air that these portraits represent.

Given that Obama's successor has also taken a revolutionary approach to the presidency, all eyes will be on Donald Trump to see how his portraits compare.