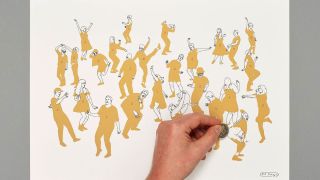 Some people start to get that festive feeling the second that the shops clear the Halloween decorations from their shelves, while others wait for the launch of heart-warming Christmas ad campaigns or a good old-fashioned advent calendar to start the Christmas countdown.

You'll usually find chocolate in advent calendars, but artist and king of the creative side project Mr Bingo has decided to shake things up with his 2017 Advent Calendar. Instead of a tasty treat hidden behind an infuriatingly difficult to open door, the Hate Mail illustrator has decided to draw 25 naked people and cover them in his own personalised rub-removable opaque gold ink that users scrape off throughout the month like a sexy scratch card.

This isn't the first time that Mr Bingo has created a scratch and reveal advent calendar, but the 2017 version does have a few notable exceptions. Unlike before, everyone on the advent calendar is a real person. Mr Bingo photographed 20 of the calendar models especially while another four submitted their own snaps for the basis of an illustration.

There were many different reasons I chose people for my Advnt Cal. When Neil sent me this pic I was like “YOU’RE IN” https://t.co/NwEFJrSSwq pic.twitter.com/vC7imUBhqMNovember 6, 2017

On top of this, everyone on the calendar is dancing, plus the whole thing is printed on high quality paper, which – according to Mr Bingo – makes it "a bit more fucking arty." The artist himself treats people to his own naked form on Christmas day.

As well as plenty of nudity, the calendar also comes with a separate track list of the tunes each person is dancing to. Alternatively, you could listen to them yourself in this Tweet.

Each calendar is hand screenprinted and signed by Mr Bingo. And don't worry if you've got children, according to the artist "it's just naked people dancing, there's nothing perverted and no hidden surprises!"