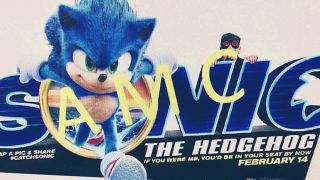 It feels like we've spent a lot of time talking about the upcoming Sonic the Hedgehog movie this year, and with good reason. Back in March we reported how fans were up in arms about the iconic video game character's new CG look (with the weirdest human-like face and set of teeth you just couldn't ignore). The backlash was so fierce from the leaked images that soon after, the film's director, Jeff Fowler, announced Sonic would be taken back to the drawing board.

After that all Sonic chat fell silent, until last month when an improved 3D version of the computer game character did the rounds on social media. And now another leaked image (below) of the famous blue hedgehog has surfaced, with early indications suggesting it's the game-accurate character design fans have been waiting for.

Gone are those human teeth, the weird eyes and sort of person-shaped body, the new design instead reinstating Sonic's trademark lopsided smirk, wide cartoon-like eyes and body proportioned back to that of the original character. The only major difference that remains is the new Sonic's arms are still blue, but taking the other improvements into account, that seems a manageable trade-off.

I agree entirely! I cannot wait for the next trailer to drop any day now! *Extremely hyped!* And I love how Sonic looks now; he looks so fuzzy and believable! (Really cute! ^^)November 6, 2019

The most recent leaked image initially came from Twitter user @SnideyMcCoolGuy, with @TailsChannel finding a wider version to add to the mix. While fans are struggling not to get excited by the latest reveal, it is worth remembering that this new image is not from a confirmed source, so whether this favoured new design comes to the big screen remains to be seen.

However, if this isn't the work of Paramount, we strongly suggest its creative team speaks to whoever is behind it because if the reaction to it so far is anything to go by, they're on to a winning design.