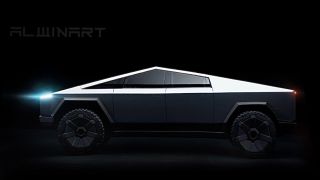 A concept based on Elon Musk's new details about the Cybertruck (Image credit: @Alwinart on Twitter)

Like it or loathe it, there's no denying that the design of the Tesla Cybertruck is quite the conversation starter. The vehicle's eccentric, boxy design turned heads when it was launched in November (we still can't decide if it looks futuristic or old-fashioned). And it sounds like Tesla hasn't quite made up its mind about the design either, as new details tweeted by Tesla CEO Elon Musk suggest tweaks are still being made before the vehicle's release, slated for 2021.

Last week, a Twitter user asked Musk what the biggest change to the production version of the Cybertruck (expected to arrive next year) will be. Musk responded that Tesla had “reduced the size by ~3%”, as well as levelling the centre line and lowering the window sill height.

Thankfully, concept artists were quick to turn Musks' details into renders (such as Alwinart's, below) to show how these subtle differences could affect the overall look of the vehicle. Spoiler alert: it's not that different, and is still extremely boxy. We'd love to see some pixel art of the thing.

If Alwinart's render is correct, the vehicle could be a little more squat than the version revealed last year, with a less dramatic downward slant. As design changes go, we'd say this is unlikely to change anyone's mind about the Cybertruck – with its boxy edges still very much intact, the many designers who mocked the vehicle back in November probably aren't about to do a U-turn.

We can't help but wonder if, instead of a nip here and a tuck there, it would be more pressing for Musk to see to those windows. In what felt like something straight out of a sitcom during the Cybertruck's launch, the "shatterproof" glass broke after a metal ball was thrown at it. Twice. You can relive the smashing moment below.

Still, like all controversial moments in branding, the Cybertruck has got us talking. If the vehicle does eventually appear next year, we'll be intrigued to see whether it looks like the render above, or whether, like the Cybertruck's windows, our expectations will be shattered once again.