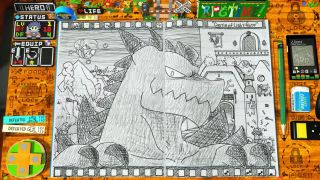 Gamers will be well aware that E3 is currently in full swing. And while there are plenty of exciting announcements for gamers to savour, there are also some amazing releases that will capture the imaginations of creatives. Take the trailer for upcoming RPG The Legend of Wright, which uses a charming hand-drawn aesthetic.

Created by Japanese indie studio Desk Works, The Legend of Wright takes place inside a student's notebook. The game's distinctive graphics excellently recapture the look and feel of jotter scribbles, as we see dragons and ogres come to life on the page.

These hand-drawn visuals are also a brilliant digital recreation of the sorts of doodle art you could expect to find in an exercise book. In the video below, you can see how the player controls a fantasy hero to solve puzzles and vanquish all manner of mythical beasts.

To stop the hand-drawn visuals from looking a bit grey and monotonous, The Legend of Wright frames the notebook with colourful controls and vibrant maps. Accompanying tools such as a compass and an eraser also suggest that the player will be able to use more stationery than just a pencil.

The announcement for The Legend of Wright took place during Microsoft's E3 2019 presentation. Another significant Microsoft story from the conference includes the unveiling of its absurdly powerful new Xbox console, which looks set to take the gaming experience for players and developers to a whole new level.

And just like Xbox Project Scarlett, there's no concrete release date for The Legend of Wright. However we do know that it will be available on mobile, PC, and Xbox One at some point during 2020.