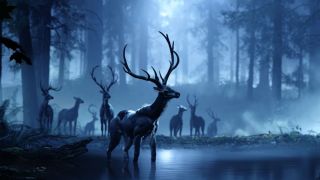 Game developers and designers are set to see their work come to life like never before. This is thanks to the announcement of Microsoft's next generation console, which goes by the tantalising codename: Xbox Project Scarlett.

Revealed on 9 June at the Los Angeles E3 conference, Project Scarlett is the successor to the XBox One. In the launch video for the console (below), the creative team behind Project Scarlett promise that it will provide "the most immersive gaming experience ever".

Sounds like exciting news if you want your environments, characters or even free textures to look their very best. But how exactly will the console deliver on this promise?

Project Scarlett claims to deliver a four times more powerful gaming experience when compared to previous generation consoles, including the Xbox One, thanks to its custom designed processor based on AMD's Navi 2 chipset.

Faster load times will be powered by a revolutionary SSD and high-bandwidth DDR6 RAM. Games will also run more smoothly due to Project Scarlett being able to handle up to 120 frames per second.

Images will be displayed in up to 8K resolution, although it's unclear if this will be limited to video streaming or include video games, too. Meanwhile 3D lighting will look more realistic than ever with the help of hardware accelerated ray tracing, and load times will be drastically reduced with the support of a solid-state drive. In short: get ready for a load-time-free gaming experience that's suited to bringing immersive worlds to life.

This will all be welcome news to game developers as their creations won't be hindered by clumsy load screens. The introduction of ray tracing enhanced lighting also means that a creator's 3D work is set to look more lifelike and stunning than ever. This is down to the fact that ray tracing is better equipped to recreate the way lights bounce off and interact with individual objects.

All in all, these updates have led to Microsoft claiming that Project Scarlett is the biggest generational leap yet in terms of its consoles.

If this has whetted your appetite for all things Project Scarlett, you'll have to wait until Christmas 2020 to get your hands on it. Microsoft hasn't revealed any pricing details yet, however it has unveiled that Halo Infinite will be among the console's launch titles.