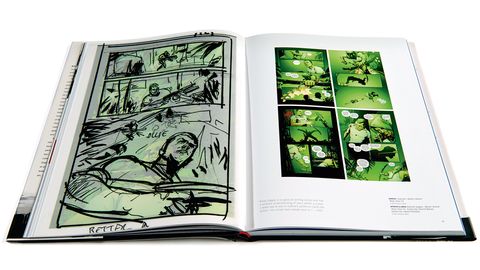 This inspirational book covers the gamut of Jock's career and gives fans a unique insight into how the artist works.

Looking to be inspired from a truly great comic book artist? You don’t need to look much further than Jock, aka Mark Simpson.

Highly acclaimed and hugely talented, over the past two decades Jock has become well known for his ground-breaking comic art from 2000 AD, The Losers and more recently, Batman and Wolverine.

He’s equally respected for his concept art, which has determined the look and feel of films like Dredd and Ex_Machina. There’s also a third string to his bow, in the form of his work with pop culture poster design company Mondo.

All these creations and more are gathered together in this collection of Jock’s work. While the 160 pages of this hardback are relatively light on text, this has the benefit of giving maximum space and attention to his dynamic and energetic art. It’s all beautifully printed on high-quality paper, with sumptuous finishes, which goes some way to justifying the relatively steep purchase price.

Following a foreword by film director Peter Berg, and an introduction by DC Comics co-publisher Jim Lee, the book begins proper by showing us a series of glimpses inside Jock’s studio. Then it’s on to the first main section, examining his comic work and featuring full-colour reproductions, process sketches on tracing paper on top of the finished art, and insightful looks behind the scenes.

As well as a look at his commercial work for the likes of Marvel and DC, we also get to focus on one of Jock’s own gothic horror comic, Wytches, with its retina-piercing colours. And there’s also something delightfully unexpected: an acetate overlay that shows the original of the Frank Miller tribute cover from The Dark Knight 3: The Master Race, over the final, printed version.

The second section of the book focuses on Jock’s work for Mondo, including tributes to Zombie, The Dark Knight Rises and Shaun of the Dead. To honour the former, there’s another acetate treat; for the other two there are special foldout pages.

The final section reviews Jock’s career as a concept artist for the film industry. He’s actually been working on Star Wars: Episode VIII too, but sadly there’s no art on show for that here.

This small disappointment aside, this is a thoughtfully presented and fully comprehensive look at a true great. In short, exactly what a comic artist tribute should be.

The Art of Jock

This inspirational book covers the gamut of Jock's career and gives fans a unique insight into how the artist works.