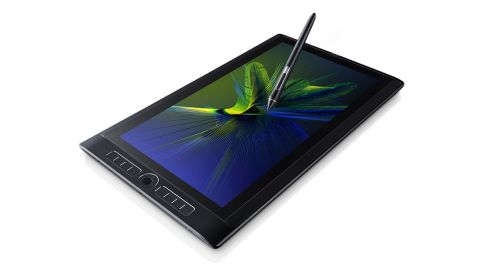 The Wacom MobileStudio Pro tablet PC aims to give professional designers, illustrators, artists and photographers  the convenience of a mobile tablet, alongside the full power of creative apps like Photoshop and Illustrator.

The Wacom MobileStudio Pro is a world apart from its Cintiq range of devices. Sleeker and less boxy, it feels high-end before you even power it on. The choice of materials is exactly what you'd expect from a device of this cost, and the weight adds to the solid feel.

The Wacom MobileStudio Pro isn't light, but then this isn't a casual Surface or iPad Pro. It’s a professional-level content creation machine that users will lean on heavily and, as such, needs to be sturdy. Lets face it: when it's on the desk, the weight is a definite bonus.

It certainly doesn't need to be carried with a keyboard or mouse (although that can be done) as the eight fully customisable ExpressKeys, touch ring, and various switches and pots are well-placed for right or left-handers. They’re also numerous enough to enable the most common shortcuts to be programmed (globally or by app too).

The biggest talking point of the Wacom MobileStudio Pro is its screen and pen interface. Wacom's Pro Pen 2 boasts increased capabilities – including 60 degrees of tilt, over 8000 levels of sensitivity and pixel-level pointing accuracy. And while that might seem overkill, it really helps make the whole drawing experience feel more natural.

This leads onto the most important element of such a device: the screen. The 4k display is colour accurate enough for most, and positioned very close to the etched glass screen, making it a real joy to use (and it gives out much less glare than, say, a Macbook Pro).

Paired with the Pro Pen 2, the screen has just the right amount of friction to make for a consistent and enjoyable experience. The large, soft, rubber grip of the stylus helps ease fatigue, while simultaneously making all strokes – from small detail to large canvas-crossing movements – feel accurate and easy.

The contrast and brightness of the display are above average, powered by good quality Nvidia Quadro GPU, perfectly suited to pro 2D and 3d work. This GPU choice is paired well with the i5 or i7 CPU RAM, depending on which model you’re using.

The higher spec model has a 3D scanning camera, which some users will ignore, or at the most try out a handful of times. However, if you're a 3D artist, or have use for such a peripheral, the fact that it’s built into the Wacom MobileStudio Pro might be a bonus – especially considering it comes bundled with Artec Studio 11 software, making this an out-of-the box solution.

Our main gripe with the MobileStudio Pro is that the adjustable stand is an optional extra. This feels a bit cheap considering the initial outlay - and the stand lacks the innovation of solutions from cheaper tablets, although it does fit in with the model Wacom uses across its product range. That said, as a professional device it’s likely that some users will already have their own drawing board setup.

Wacom does offer some good accessories, such as a breakout box that lets you connect to a third-party computer, opening up use as a standard Cintiq. This offering will be of more use to some than others, of course.

Real world use sees an easy four–five hours of battery life, depending on the task. This isn't too far from the advertised six hours for this kind of machine, and should comfortably cover most on-the-move work.

The two models cater to most users’ needs, with 8-16GB RAM, 256-512GB SSD, bluetooth, Wi-Fi and even GPS is on offer. Even if you remove the excellent display and pen capability, the remaining PC is still pretty good for a mobile machine.

The cameras are functional, but nothing special. In reality they are a cheap addition for Wacom and it's rare that you'll want to use a two-plus kilo, 16-inch machine as a camera, especially when you can use the bluetooth connection or SD slot to quickly move files over.

We like: the display and screen combo, the Pro Pen 2 and battery life. We don't like: the price or the weight (at least for travel). Also, the lower specced versions can feel a little underwhelming compared to the range topper. If you can stump the extra cash, then do. You'll not need to upgrade for some time.

If you’re in the market for a portable device for light computing, the odd game and some office tasks, then the device is massively overpowered and overpriced.

However, if you’re an artist or designer then you can't do better than the Wacom MobileStudio Pro.

The screen interaction is a true joy (the etched glass is the same as found on the Cintiq range), the Pro Pen 2 is both fun yet detailed, and the spec of the underlying PC makes for a workhorse machine that can easily replace a notebook PC. It might not be cheap, but it succeeds at every task it was designed for.

Also read: The best drawing tablet: our pick of the best graphics tablets