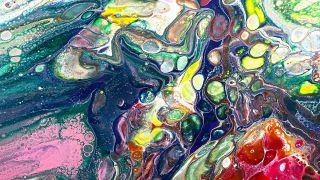 Craft trends aren't something you might have paid a lot of attention in years past, but in 2019, they've been more visible than ever before. This is, of course, thanks to the internet, but particularly to Instagram. The social media platform has created crafting communities that span continents, making the sharing process quick and easy.

Craft is at the basis of the design process, and the act of crafting can be both professionally and personally fulfilling. Makers follow trends that are born out of consumer and social preferences, and the increased visibility of crafting has meant these trends have evolved alongside those in wider design. This year, that's meant a focus on environmentally aware design that's gone hand-in-hand with a search for authenticity.

To discover this year's hottest craft trends, we've spoken to crafting pros, who have shared their thoughts on how these trends have affected the wider design industry, plus what to look out for as we head into 2020.

We've got plenty more celebration of craft here on Creative Bloq. Why not check out our examples of paper art? Or make your own cut-and-paste mood board with these tips.

Visible mending makes a feature out of fixing worn or damaged fabric. According to Charlotte Jenner, who runs A Nest of Gentle Makers, a crafting retreat in the New Forest, this is due to a backlash against the way we consume.

"People seem to want to mend clothes as they are reading more about the downside of 'fast fashion'," she says, "both in terms of using up the resources of the planet and also the poor treatment and conditions that many of the workers have to tolerate when making clothes for our consumption."

Kate Sekules, a repair champion who runs an established visible mending website, agrees that consumption culture has paved the way for the craft's popularity. "Clearly it's the craving for the handmade and unique in our culture, owing to the metastasising cancer of mass production," she says.

"If everything's the same, of course we start to want a different look, and nothing shows the individual hand more than visible mending."

How has this craft trend affected professional design? According to Sekules, whose book MEND! A Refashioning Manual and Manifesto will be published by Penguin in Summer 2020, visible mending has had a huge impact. She's seen a general swing to embellishment and detail in fashion design that's a reflection of visible mending.

Sekules explains: "I'm seeing it in all sorts of consumer goods – the display of joins, instead of slick smoothness – think Kintsugi (porcelain repaired with gold) and boro (historic Japanese patch-on-patch with sashiko stitching), both ridiculously trendy and adopted all over. I've seen 'boro' cushions in TJ Maxx. This is going too far."

The interest in visible mending certainly hasn't peaked, says Sekules. She believes that the increasing anxiety people hold about the environment will continue to have an impact on their design preferences. "I think people are really waking up to the impact of their consumer choices so will continue to gravitate to design that's recycled, upcycled, hand-done."

But will the aesthetic change? Sekules thinks so. "It's going to get more elegant and refined, not so scrappy and messy. This is more than a trend, since there's so much philosophy behind it. Creative reuse is essential now, and will be reflected in all parts of the design field."

Wabi-sabi is the art of imperfection. An ancient Japanese tradition rooted in Buddhism, the philosophy aims to remind us of the transient nature of life. In design terms, it's the ultimate rebellion against products that are shiny, new and sterile. It’s seeing the beauty in flaws: a cracked pot or a frayed edge – a celebration of the parts of an object that show its history and use.

If you search #wabi-sabi on Instagram, you'll see a stream of mismatched imagery that encompasses design of all sorts – in line with the philosophy.

"It's of fundamental importance to embrace the whole concept, without cutting any part; neither philosophy nor aesthetics," says Manuela Metra, a wabi-sabi ceramic artist and fine art photographer, who has run the Alice In Wonderland art atelier in Milan for over 20 years.

Rather than being a single skill, wabi-sabi is an approach to making and design as a whole, and Metra predicts that the concept will only become more widespread. "I think that wabi-sabi will, in the immediate future, contaminate new areas not directly connected with ceramics," she says, citing design, fashion and textiles as potential new areas for wabi-sabi to infiltrate.

Dirty pouring is not as obscure as it sounds. It simply means mixing multiple colours of acrylic paint and pouring onto a surface. As the paint leaves the cup, the colours mix, creating an other-worldly effect that takes on different patterns. It's possibly one of the most accessible crafts (gravity plays a big part here) and the results are pretty delightful right from the outset. Crafters can add different materials (think glitter) to create varying effects, but the skill is in the tilt and the ratios of paint that dictate the outcome of the piece.

There's an enormous online presence for acrylic pouring, with thousands of guides and videos that show the popularity of this at-home craft technique.

Australian fluid artist Shelee Carruthers offers an e-course in fluid art. Her website invites you to 'Join the Fluid Art Revolution', and it certainly seems to have been a revolution in her own professional life, replacing charcoal as her medium of choice many years ago.

Carruthers has seen acrylic pouring rapidly grow in popularity over the last year, and thinks she knows why. "I believe the ‘instant painting’ you get when pouring instead of using a brush is very attractive to not only artists, but novices and the inexperienced creatives that want to try something new. Anyone can do it and with a bit of luck, you may just create an absolute masterpiece."

And she believes that the technique is certain to affect other areas of design. "I most certainly have seen this style evolve and move into other areas like prints, homewares and wallpaper.

"In my own personal experience, my work is about to feature on luxury haute couture gowns at the January Paris fashion week! Everyone loves the organic feel of fluid art."

Carruthers believes that as we move into 2020, we are sure to see the continuation of the surge of popularity for acrylic pouring. Just as with visible mending, the act of creation is a relaxing antidote to stress and anxiety. And as Carruthers points out "it’s better than meditation because you get a nice piece of artwork in the end!"

Pyrography is the process of etching into wood with charcoal then scraping off the burned wood to reveal the bare, un-scorched wood below. The ancient technique, which used to involve charcoal, is now performed with a wood-burning tool that looks like a pen with a metal tip.

Hobbycraft's pyrography search page shows wooden items ranging from spoons to doll's houses, demonstrating the versatility of the technique and the range of items that can be customised – making it an attractive skill to learn.

There's a strong community of pyrography artists, too. From Instagram pages to Etsy stores, pyrography inspiration is readily accessible online. Jimmy Wänfelt, artist and admin of the Pyroartcollective Instagram page, says there's something so special about that artform that he sees artists become engulfed, often leaving their previous crafts behind.

Wänfelt sees differences in the design process to other crafts. In fact, he believes less actual design takes place because of the high-risk nature of the technique itself. "Most [pyrography] is mimicking photos and going for photo realism," he explains.

"When people design on their computer or on scrap paper, there are not very big consequences when a mistake is made. You either eras­­­e or start over with very little thought. You can design on those platforms and then take that design to your pyrography, but then you end up making the same piece twice, and many don't have time and energy for that."

The future for pyrography lies in different tools and techniques being used, as Wänfelt predicts experimentation such as using a torch as a brush and carving as a highlighter tool. This will make for faster burning and new ways to pyro.

The precise craft of weaving has roots in countries around the world. There are hundreds of weaving techniques, some grounded in culture and tradition, and others more modern. And crafters and designers alike are experimenting with the varied forms, for almost every purpose you can imagine – clothing, wall hangings, jewellery, toys, pet accessories... you name it and you'll find it weaved on Instagram. The trend has found its way into design across the board, including featuring heavily on the high street, with stores such as Anthropologie going big on weaved wall hangings.

A peaceful, meditative process, weaving is one of the oldest and most traditional crafts, but it is finding new purpose in the modern design world. Journalist and crafting and colour expert Momtaz Begum-Hossain believes that the year ahead will see craft take a turn toward the extroverted. "2020 is going to be the year of performance craft and we’ll be seeing more ‘live crafting’ mixed in with cabaret style performances."

And it won't stop there, as weaving continues to evolve from its tranquil roots. "In recent months I’ve seen knitting inspired catwalk performances, human weaving, someone dressed ‘as knitting’ and even seen metal crochet that creates music," she continues. "It’s all possible and they’ll be more people trying this type of multi-media and live crafting."