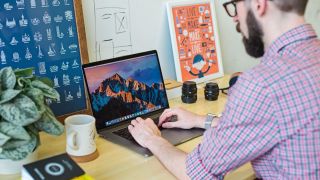 If you'd have asked me ten years ago, 'Hey, are there any apps that will let me code websites visually?', I'd have given you that awful stare that only an annoyed web developer can give.

'No,' I would have said. Then I might have shrugged my shoulders, pursed my lips, and pointed to a nearby bookshelf with a five-inch thick web design book dedicated to JavaScript, HTML and CSS. 'Good luck,' and I'd have patted you on the back and been on my way.

Two things glare at me as I recount the above:

We've seen smart industries choose to empower creatives rather than belittle or neglect their unique and potentially cataclysmic (for good!) talents. The film and gaming industries have adopted tools that leverage a visual thinker's mental model.

I mean, have you seen the latest 3D modelling software packages or video game engines? They are mind-bogglingly good. They give creatives a visual means to solve complex problems without employing a single line of maths. This is a staggering engineering feat. Just peruse Dribbble or Behance for the stunning effects technical ambition has wrought.

The web development industry has yet to enjoy such an epoch. For an industry delicately predicated on the co-operation of design and technical skills, it's a wonder we have not seen design tools bring those disciplines closer. Until now.

If you listen closely, the rattling breath of these medieval times is giving way to the sharp inhale of a creative renaissance. The uprising of user experience practitioners, who focus on empathy over analytics, have forced us to contend, design for, and fix problems wholly unrelated to our own. These stewards of empathy have lighted the path to empower a legion of new doers.

Bret Victor (worrydream.com) is one such steward. His talk, Inventing On Principle, and essay, A Brief Rant On The Future Of Interaction Design, delve into why technology must solve problems for human needs foremost by providing creators an immediate connection to their work.

Coding does not solicit immediate feedback. It can take seconds, or much more, to verify the result of a single character change. This latency cripples the creative process. Imagine daubing a canvas with a loaded paintbrush… and seconds later the colour appears. How infuriating would that be? Inflicting on humans obvious violations of the physical world is a recurring theme in technology, and I hope to see a big, black curtain fall on it in the near future.

Victor gives us simple language through which to address and repair this persistent theme. We have 'problems', such as pushing a sliver of metal into wood, and a need for 'tools' that amplify human capacity, which in this case the hammer is an admirable response.

The hammer fits a person's hand, snugly, naturally, as if it were designed for a human. Its feedback is instant: strike, and see an embedded nail. It's a human-first solution, and it keeps the human's innate capabilities top-of-mind. Interaction design can learn a lot from a hammer.

What if we could "code" without coding at all? What if that "code" could display instant hammer-to-nail visual feedback? What if we could solve many of the problems in web design through a user interface mapped to a creative's mental model? How many more people could join the fray and steer us toward a more beautiful and usable web?

As Victor has proposed, and the game and film industries have proven: this reality of visual problem solving is all too possible. As an engineering manager at a company whose sole impetus is to empower designers, I haven't been this excited about the challenges that lay ahead, and I haven't had this much pride for the successes my team has already earned. But I'm most excited for the empowered and for all their patrons.