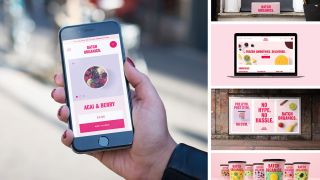 Every designer needs to know about user experience, commonly abbreviated to UX. And the first thing to understand is exactly what user experience actually is, as well as being clear about what it isn’t.

UX is not web design, which is about the nuts and bolts of making digital interfaces function. It’s also distinct from (though closely related to) UI design, which is about designing the visuals of an app or website. Instead, UX is about making the experience a great one for the user – which means that in theory someone who can neither draw nor write code could be an expert in it.

UX is most commonly associated with making apps and websites, but as Matt Theakston, experience design director at TH_NK points out, it goes way beyond that. “UX lives beyond the web,” he stresses. “It already flows, end-to-end, through the customer journey: from designing apps, shops, showrooms, cars, chairs or voice assistants like Amazon Echo. In the future, who knows where it’ll take us?"

You’re probably already more aware of UX than you realise, and as Spencer Buck, founder of Taxi Studio, says, getting on board doesn’t necessarily mean you have to become a fully fledged UX designer. “It’s about adding another layer to the thought process – being curious about how humans behave, and how we can influence that behaviour through good design.”

And that’s less about learning a whole new discipline or methodology than taking what you already know and applying it in a different way, says Alec East, founder of Narrative Industries.

“Going back to the Bauhaus, they taught students to eliminate the idea of the individual, and to focus on the productivity of design instead,” he says. “This means they had to understand how their designs would be used: the notion of form following function. For instance, in print design, if the typography is too small and dense, the reader’s enjoyment of the story is impaired.”

UX involves applying similar principles to digital, East continues. “It means, for example, knowing the importance of removing cognitive load, whereby too much information on one screen can disorient the user.”

“The biggest mistake you can make is going straight to the ‘idea’ or ‘concept’ – diving into designing how the interface should look and feel – without a deep understanding of the functions and processes that are required to make it work.”

The most effective way to develop your UX skills is by communicating and collaborating more closely with people working in the field, says Buck. “So our print designers will collaborate with UX and digital designers on certain projects, and this works well as a way of expanding their thought processes with a real problem on the table, rather than through theoretical training.”

Marta Lisboa, digital designer at CBA, agrees that improving your UX skills is less about studying and more about doing. “Like creativity, UX is a hard-earned skill, and like any other skill, it improves with practice,” she reasons.

But that’s not all. Another important thing you can do is stay alive to the user experiences that are part of everyday life, says Max Ottignon, co-founder of Ragged Edge. “You’re interacting with UX every day anyway, whether it’s posting on Instagram or streaming a movie on Netflix,” he points out.

“So try to engage your design brain while you do it. Analyse why the interface has been designed that way. Think about the techniques the designer has used to create a seamless, engaging journey. And as with anything else, it’s practice. Try to get your hands on some digital briefs and show what you can do.”

Also, be aware that the ground is constantly shifting. “Today’s users, especially mobile users, are becoming less tolerant, more demanding, and they always want to be surprised,” says Lisboa. “The challenge is to continue being an innovator and develop experiences that are more relevant, delightful  and memorable. To provide metaphors that make screen-based interactions feel a bit more real. And to do all of this while adapting to rapidly evolving tech and digital trends.”

To help you stay ahead of the curve, learning resources abound. East recommends books such as Don’t Make Me Think by Steve Krug and Ends: Why We Overlook Endings for Humans, Products, Services and Digital by Joseph Macleod, as well as following people such as @skrug, @wasbuxton and @jnd1er on Twitter.

Theakston is a fan of The User Experience Team of One: A Research and Design Survival Guide by Leah Buley, Carroll urges you to attend a UX gathering such as the monthly London event IxDA, while Lisboa likes to keep up with new developments via Uxmag.com, UsabilityGeek.com and the Invisionapp.com blog.

But always remember one thing, concludes East. “There are a bazillion books and blogs that will give you loads of rules, but the only person that counts in UX is the user; that’s why they’re the first letter in UX.”

Ottignon agrees, and adds the following: “Put the user first, by using as little design as you can. UX isn’t about flashy creativity: it’s about crafting an experience that’s intuitive and stress-free. Don’t let design get in the way.”