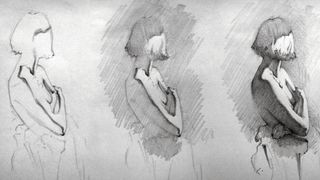 There are many aspects of lighting that you need to consider in order to convey form. One very useful fundamental is the terminator line.

The terminator line is the transition zone between the areas of light and shadow. The darker part of the shadow will begin directly after the terminator line ends. It will appear as a dark gradating band until it meets a secondary light source. The secondary light source, in this instance, will be a bounce light. A bounce light occurs when your main (key) light hits another surface and bounces back upon the subject. If you want to learn how to draw people, this is a common lighting choice for figure drawing as it defines form clearly.

If your key light is softer, the terminator line will become more gradual. Surface textures will also become more visible in this area. Textures often lose their visibility in the shadows but become more defined on well-lit surfaces. Textures at the mid-value range, such as the terminator, will often be strongest.

Adding a darker band to the highlight edge separates lighting clearly and conveys a better sense of form and solidity. From a personal point of view, I also find it aesthetically pleasing!

Commonly seen in figure drawing, the terminator is useful to build forms quickly. The terminator line is the dark band that appears between two meeting sources of light. After roughly sketching in the outline and silhouette of my figure, I add the terminator line to separate the main light source and the area of shadow. I often use this approach because it's so quick and time-efficient.

With the terminator in place, I can now block in the shadow area and, here, the background too, using thick parallel hatching lines. Separating the light and shadow in this simple way helps define shape and imply forms quickly. Filling in the background also gives me the opportunity to lose edges in the shadows and pull focus back into important areas.

Now that the lighting has been defined on my figure, I can begin refining values and adding any smaller details. Keeping bounce light in mind, most of the shadow values don't go darker than the terminator. Using a blending stump I can easily smooth gradients and soften forms. Using cross-hatching I add texture to the character and break up any unnecessary empty spaces.