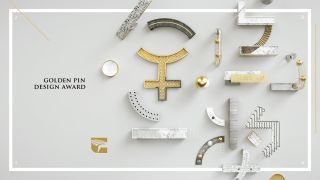 What makes for a successful piece of branding? An original idea? An innovative use of materials? How about a sense of fun? In the case of the logo design and branding for the Golden Pin Design Awards 2016, all of these factors came together to create a truly inspiring piece of graphic design worthy of the event itself.

In case you weren't aware, the Golden Pin Design Awards are a premiere annual event that celebrate the philosophies and principles of design in the Chinese-speaking, also known as huaren, market. Hosted in Taipei's Design Centre, this year's ceremony was represented by playful and experimental motion graphics and visuals courtesy of production studio, Bito.

Drawing inspiration from a key visual created by renowned calligraphy artist Tong Yang-Tze for the 2014 awards ceremony, the Bito team decided to give this classic look a modern reinterpretation. They did this by rendering the brush strokes found in Tong's design with common huaren materials, such as concrete, gold leaf, rattan, acrylic, and marble, as well as simplifying the overall shapes of the letters.

At the centre of these visuals are four golden pinballs which represent the four categories of the Golden Pin Design Awards, namely: Product Design, Packaging Design, Visual Communication Design, and Spatial Design. All of these elements come together in fun graphics that look like the mechanisms of a pinball machine. Bito founder, Keng-Ming Liu, explains that this pinball imagery represents huaren designers seeking stimulation and inspiration.

To give visitors first hand experience of what it is like for huaren creatives pursuing their ambitions, Bito also produced entertaining invitations in the form of mini rattling pinball machines. Liu explains how these handheld pinball machines echoed the design process. "Your hands must be very steady, and you must be in a calm state of mind," he says. "Just before you find inspiration is actually the hardest moment."

The tactile nature of these invitations was also important for Liu. "I think most young people have never played a game like this, they tend to play this sort of thing on their cell phones" he explains. "But playing it like this should remind guests that design can also be a lot of fun."

Playing by hand also allows for error and idiosyncrasies, another key part of Bito's design work. "I like imperfections as the give a piece of work a more human touch, it's something different," Liu adds.

As well as producing the invitations and visual graphics, Bito also created video work for Golden Pin Design Awards call for entry (see above), plus motion graphics for the ceremony itself. The latter took the form of huge curved video screens which played subtle animated sequences, each slightly different depending on which category was being awarded.

The centrepiece of the award ceremony was a cutting-edge piece of dance that incorporated Bito's visual graphics. Choreographed in collaboration with Ray Dance Company, a dance troupe founded by two siblings, the dance was a culmination of everything Bito and the Golden Pin Awards were aiming to communicate.

"We chose Ray Dance Company because we wanted to promote the new generation of Taiwanese creatives and to try a new style of expression through dance,” says Liu.