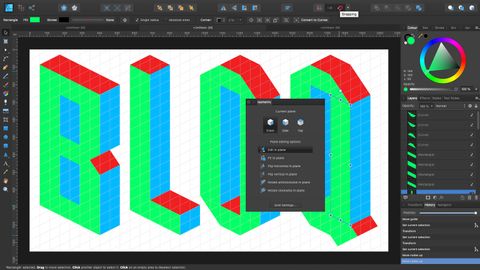 With no legacy code to hold it back, Affinity Designer 1.7 feels clean and capable, and digging deeper into its features won’t disappoint. Amid the innovation, though, are some notable omissions.

It’s coming up to five years since Affinity Designer launched Serif’s brand new graphics suite. The vector drawing app was joined in 2015 by Affinity Photo, and this year by Affinity Publisher.

Now in version 1.7, Affinity Designer remains one of very few rivals to the 32-year-old Adobe Illustrator. And, as a £48.99 purchase for Windows or Mac, costs less to buy outright than three months of a Creative Cloud single-app subscription.

Affinity Designer's attractions are enhanced by a surprisingly complete iPad edition (see our Affinity Designer for iPad review), and the ability to roundtrip Designer documents to Affinity Photo or edit them directly within page layouts in Affinity Publisher. Adobe’s apps, with their diverse histories, can’t match this integration. But just how good is Affinity Designer as a drawing app, and is anything still missing? Read on for our verdict.

Anyone who draws complex artwork will habitually duplicate objects to build up effects. It’s the oldest workaround in the book, but makes editing the shape later impractical. Why can’t you just apply multiple strokes and fills to the same path?

Well, with the 1.7 update, you can. Fills and strokes for an object are listed in the Appearance panel, where you can re-order them and change their blending modes (Multiply, Overlay and so on). You can’t add fills or strokes to more than one object at once, or to live text, and the feature is isolated from the Layers panel with its effects and styles, but it’s a good start.

Designer has excellent grids, guides and smart snapping, further improved in this update with edge and centre alignment, and the new Isometric panel builds on these to help you draw axonometrics. Grid options include more exotic projections as well as the all-important choice of traditional 30° isometric or a pixel-friendly 26.565°, described here as 2:1. (A decade ago, I proposed ‘tetarto-orthometric’ as a term for this projection. It didn’t catch on, but feel free to throw it into conversation.)

Click Edit in plane, and you can flick between Front, Side and Top to skew objects to the grid as you draw them. Combined with Snap to Grid, this makes it quick to construct pseudo-3D scenes. Some 3D primitives and intersections would be a welcome addition.

For more expressive artwork, Affinity Designer is no Corel Painter, but includes a variety of vector brushes. Once you get used to the way strokes wriggle as you paint, there’s a lot of power in being able to select previous strokes, tweak them and apply different brushes.

A graphics tablet or the iPad version (with Apple Pencil) is best here, but the ability to use velocity as a proxy for pressure, or even manually edit the pressure graph for a stroke, enables gestural results with any input method, and stabiliser options flatter your drawing skills. (For more iPad apps that work with Apple pencil, see our best iPad Pro apps post.)

Affinity Designer’s Pixel persona includes a whole other set of bitmap brushes as well as basic retouch tools. Complemented by the option to add raster noise (grain) to fills and effects, this makes it easy to ‘dirty up’ vector artwork, which can sometimes look antiseptic.

Speed has always been a strong point of Affinity – unencumbered by legacy code – and the 1.7 update brings more optimisations, especially for Apple’s latest Metal API, although the Windows version gains too. Even on less capable hardware, Designer suffers nothing worse than slightly choppy redraw when you get ambitious with its combination of vector and pixel tools. Zooming in and out is refreshingly immediate.

Affinity Designer hasn’t always been free of small glitches, but we saw few issues during testing, and if it does crash, open documents are automatically recovered.

Other new features in Affinity Designer 1.7 include:

With a full set of vector tools and effects, multiple artboards per document, decent typesetting and the raster features too, all underpinned by prepress-ready colour management, Affinity Designer feels pretty complete. There are gaps, though.

While rival indie vector app Sketch  supports a plugin architecture that’s seen it widely integrated into workflows, Affinity Designer has none, which also limits its appeal for jobs like cutter output. There’s no scripting or any data-driven tools to compare with Illustrator’s graphing. Nor is animation supported, although you could onion-skin in layers and extract frames as slices for assembly in a motion graphics app using the Export persona, which also facilitates batch asset generation.

In Illustrator CC, complex shading is achieved using either mesh gradients or object blends, which tween one shape to another. Affinity Designer currently offers neither of these, nor object warping.

How good is Affinity Designer 1.7?

It’s hard to overstate what Serif has achieved with the Affinity suite, and Affinity Designer stands out in a sector that still has little competition. Yes, there are other alternatives to Illustrator and its subscription pricing, notably Inkscape, Sketch and CorelDRAW. But Inkscape’s open source scaffolding is the antithesis of Designer’s elegant code and UI; Sketch, though popular in digital, is a less comprehensive drawing app exclusive to the Mac; and the expensive, sprawling CorelDRAW is, well, an acquired taste. For more on an array of software options, see our digital art software post.

For general users, Designer is a vector app that’s no more daunting than others, very affordable and hard to grow out of. Pros can have confidence in the Affinity brand, but it would be good to see some attention to Affinity Designer’s remaining limitations.

With no legacy code to hold it back, Affinity Designer 1.7 feels clean and capable, and digging deeper into its features won’t disappoint. Amid the innovation, though, are some notable omissions.