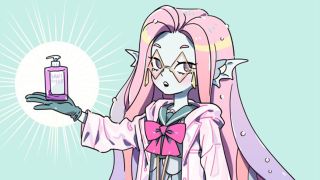 If your social media feed looks anything like ours, it's flooded with posts about coronavirus right now. Fortunately, there are some hopeful and creative responses to be found amid the panic. One such response is the resurfacing of the Amabie, a mythical Japanese spirit once thought to to ward off epidemics.

Instagram and Twitter are currently filled with depictions of the three-legged, long-haired, mermaid-like creature. The Amabie is certainly a sight to behold – check out our character design guide for more of our favourite creatures.

According to Spoon & Tamago, legend has it that the Amabie appeared off the coast of Kumamoto, Japan. The first known depiction of the Amabie comes from an Edo-era (1603-1868) engraving (below). As well as making several predictions related to bountiful harvests, it told locals: “If an epidemic occurs, draw a picture of me and show it to everyone.” And today, in response to coronavirus, online artists and illustrators are doing just that.

It's heartening to see such a creative display of solidarity. Below are some of our favourite depictions of the Amabie from social media. We love this colourful, vintage-style illustration by Shunsuke Satake:

And this boxing animation by Twitter user @wagahai_is_neko is extremely satisfying:

You can even set the Amabie as your mobile wallpaper, thanks to pattern designers Tetetextile:

Cartoonist Sensha Yoshida created this colourful depiction of an Amabie:

And this drawing by Izumi Sakuan imagines a child dressing up as the mythical Amabie:

This Amabie depction by @DiOPPIO on Twitter is particularly adorable:

i drew an amabie! she’s a yokai said to ward diseases off anyone who sees a drawing of her. japanese people are drawing her for good luck! #アマビエ様 pic.twitter.com/VrM3EZ76KzMarch 14, 2020

And @tsulala's Amabie certainly looks wise (although we're not sure where it managed to get hold of a bottle of hand sanitiser):

Monster Spotlight: Amabie (Japan)The amabie appeared from the sea and said, "If disease spreads, show a picture of me to those who fall ill and they will be cured."#アマビエ pic.twitter.com/dpYl7yAdofMarch 15, 2020