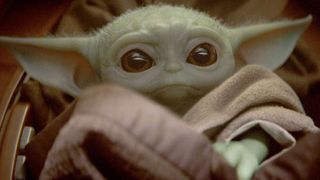 It's safe to say that Baby Yoda has taken the internet by storm. The breakout star of Disney's The Mandalorian, officially named The Child, has been spawning memes ever since his existence was announced. It seems like every week, a new artist's interpretation appears.

So you can avoid the tedious task of scrolling through the rubbish designs in search of one that's clever or funny, we've collected our favourite Baby Yoda memes right here for your viewing pleasure. To make life even easier for you, we've ranked them in order of preference.

For more Star Wars content, see our favourite free Star Wars fonts, and if you want to make your own Baby Yoda creation, you might want to check out the best Photoshop tutorials, or our guide to how to make a meme in Photoshop. Finally, if you still haven't seen The Mandalorian, then check our post on everything you need to know about Disney Plus, including how to get a free trial.

Right now though, let's get to those memes...

After watching The Mandalorian I had to do this:#pixelart #Mandalorian #metroid pic.twitter.com/O8BGSs91lFJanuary 27, 2020

Tiani Pixel has created a mash-up of The Mandalorian and the game Metroid (specifically, in the style of Super Metroid, from the early '90s). The image shows Baby Yoda in his little crib pod bobbing along behind The Mandalorian, his head even turns for extra cute-appeal. There's also a render of what powers The Mandalorian would have as a Metroid character.

This one's a stunning piece of pixel art, but as it's so game-specific, it perhaps lacks the mass appeal of some of the other memes. Ten out of ten for effort, though. (Although we'd like to see Baby Yoda's game credentials, please.)

What do you get when you combine Star Trek: Picard with the Star Wars TV series? Baby Data, of course! In this mockup from Ziggy, Star Trek: The Next Generation's Lieutenant Commander Data is reimagined with a Baby Yoda makeover.

This one is pretty disturbing. It's also definitely one for Star Trek fans, as if you don't know who Data is, it'll probably go over your head.

This one doesn't have a lot to do with art. But this tweet from Jon Favreau, who created The Mandalorian, was an instant hit. And what could be cuter than an image of George Lucas cradling Baby Yoda?

The only question we have here is why the image is so blurry. Do the team at The Mandalorian need to check our list of the best camera phones?

Following on from Yoda with human skin, which is an unsettlingly realistic 3D version of grown-up Yoda, Steven E Paugh created a Baby Yoda with human skin. As he suggested, the results are not unlike Dobby from Harry Potter. Look at those cute little hairs on his head. We think this one deserved a little more love online than it received.

This may be a slight cop-out, but our favourite Baby Yoda meme is actually the original concept art for the character, shared by Favreau. We just love it. And we love the idea of a group of TV execs looking at the concept art and deciding that they simply needed to create a whole show around it. That part may or may not be in our imaginations.

Either way, we just can't stop staring at his little toes.

So it's not exactly a meme, but this Baby Yoda cocktail deserves a mention just 'cos it made us smile. There have been plenty of Baby Yoda-themed cocktails popping up across the globe, but we like this one from Glasgow bar, Glasgowist, the best.

Did we miss a meme? Or order them 'wrong'? Get in touch on Twitter or Facebook to tell us your views.