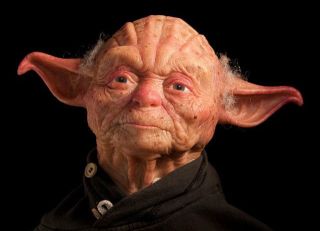 Despite only featuring in voice form in the latest Star Wars film, Yoda has been the talk of the internet lately. First, there was Baby Yoda and his tiny weeny toes. And now, there's been a resurgence of a character design from a few years ago: Yoda with human skin.

This 3D masterpiece, created Andrea Eusebi, recently resurfaced after video game critic Olly Smith tweeted a photo of it (see below). This Yoda isn't green, which isn't that surprising. And there's something about the redness around his eyes and nose that makes him super-realistic. That and the ear hair and wrinkles, that is. (Perhaps Eusebi had been following our character design tips.)

Eusebi details his concept on his blog, including what Yoda with human skin looks like from various angles. The angle below is particularly unsettling.

We should also note that considering Yoda is around 900 years old, he's in pretty good shape. We can only assume this is due to the strength of The Force.

What's interesting about this Yoda is that Yoda's designer, make-up artist Stuart Freeborn, actually based the original puppet on his own face, as well as Albert Einstein's. So this new character design feels like something of a hybrid between their faces and Yoda. You can find out more about Freeborn and Yoda in the video below.

The internet seems to be going wild for alternative character designs at the moment. Baby Thanos and Baby Sonic appeared after all the Baby Yoda hype, so will we soon see a spate of characters with human skin? Is Sonic with human skin coming soon to an Instagram account near you? We sort of hope so.