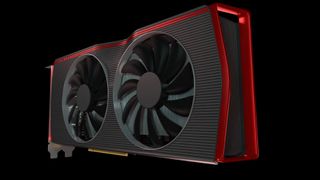 The graphics card world (yes, that's a thing) is currently all in a flurry. That's because the battle between AMD and Nvidia, the big players behind basically all the best graphics cards, is heating up. AMD is rumoured to be testing the 'Big Navi' GPU, nicknamed the Nvidia killer. This supercharged graphics card is expected to come out in 2020, as confirmed by AMD's CEO Lisa Su at this year's CES. The latest rumours are suggesting there won't be that long to wait either, as it may launch at Computex in June.

Why is the Big Navi so special? Well, according to rumours spotted on the Chiphell forums and reported by our sister site TechRadar, the Big Navi (aka Navi 21 GPU, or maybe the Radeon RX 5950) will run on a completely new form of architecture, compared to previous cards.

This new RDNA2 architecture will have 80 CUs (compute units) – that's 5,120 stream processors. This could (emphasis on the 'could') make it doubly as good as AMD's RX 5700, which has 40 CUs. It is also rumoured to feature hardware support for ray tracing, making it the first of AMD's cards to do so.

Other rumoured features (according to WePC) include variable-rate shading, mixed-precision compute improvement, better caches, higher instructions per clock and advanced voltage regulation. Which all adds up to a pretty sexy sounding card, if it works, of course. We'll assume that's what the testing stage is for.

And if the rumours are to be believed, this means AMD's new card will be in a strong position to fight off the competition from big rival Nvidia. This new super graphics card could end up being 30 per cent faster than Nvidia's GeForce RTX 2080 Ti (number one in our best graphics card roundup), so the nickname Nvidia killer may well be appropriate. However, Nvidia is also set to release its own super-charged consumer graphic card at some point in 2020, too. And these Ampere GPUs are expected to be, well, AMD killers. It's a hard one to call, at the moment.

So while we're only working on rumours, and AMD is testing its Big Navi, we'll reserve judgment until we can fully test these new GPUs. In the meantime, we'll settle for twiddling our thumbs and buying ourselves one of the best laptops for graphic design, instead.